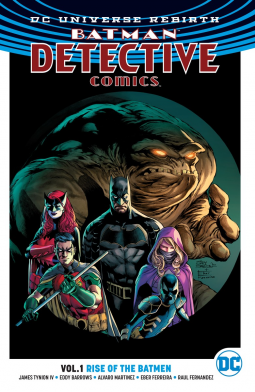 From the publisher: An elite fighting force modeled after the Dark Knight has invaded the streets of Gotham. Their armor, weaponry and surveillance equipment are based on Batman’s tech and tactics, but they’re far beyond anything he’s ever seen. And while these Batmen’s motives remain a mystery, their targets are all too clear…

Batman knows he can’t face this foe alone, and neither can the crime-fighters caught in the crossfire. So with Batwoman—secretly Bruce Wayne’s cousin, Kate Kane—as his general, he’s organizing the next generation of Gotham heroes into an army.

Tim Drake, a.k.a. Red Robin. Stephanie Brown, a.k.a. Spoiler. Cassandra Cain, a.k.a. the Orphan. And reformed criminal Basil Karlo, a.k.a. Clayface. These are the shock troops in Batman and Batwoman’s war. When they finally see the face of their true enemy, will they stand together…or fall apart?

Detective Comics Vol. 1: Rise of the Batmen, by James Tynion IV, is the first Rebirth collection of Detective Comics. Unlike a lot of books, Batman didn't change a whole lot due to the New 52, but Rebirth has given the writers, in this case Tynion, a chance to change the direction a bit. In this case, Batman discovers a fleet of small, high-tech drones that have been watching him and other heroes in Gotham. He decides its time to create a "team" and train them. He recruits Batwoman to train the kids; they include Red Robin, Spoiler, Orphan, and Clayface (a nice non-traditional addition). They soon come face to face with a group known as the Colony, a group of paramilitary modeled on Batman himself. What follows should only be read, as there as several pretty large spoilers, and one heck of a thread that should lead to a very interesting future story.

Tynion has done a nice job with the characters of Batman and Batwoman. The interaction between these two (who are cousins) is well done, and it appears their working relationship is maturing. Clayface is becoming a fun character, as well. He brings fresh eyes to the hero game, and gets some great lines. Finally, the growth of Tim Drake, aka Red Robin, is terrific. Its hard to take a nearly perpetual teenager and demonstrate growth, both physically and emotionally, but Tynion has done so with flying colors. Tim's maturation as a hero is a highlight of this collection.

I really liked Detective Comics Vol. 1: Rise of the Batmen. If this book is any indication, James Tynion IV is off and running with a story that could end up rivaling some of Scott Snyder's now classic tales. I can't wait to see where he goes from here. I highly recommend this book for Batman fans. It's also a decent starting point for new readers.

I received a preview copy of this book from DC Comics and Netgalley in exchange for an honest reveiw.
Posted by Scott at 6:18 AM