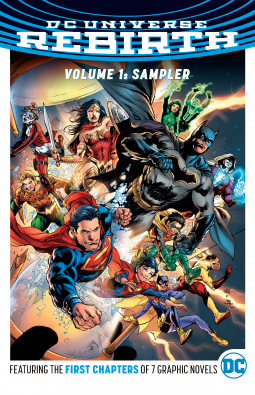 From the publisher: DC Universe: Rebirth is the line-wide series relaunch of the World's Greatest Super Heroes. Starting from Volume 1, DC Universe Rebirth ties in threads from the past five decades of storytelling and sprinkles exciting new creators and a diverse mix of heroes and villains into the new DC Universe that began in 2012.

This DC Universe Rebirth sampler includes the first chapters of the most critically and commercially successful series from this monumental launch, including:

BATMAN VOL. 1: I AM GOTHAM
by Tom King, David Finch and Mikel Janin

The DC Universe: Rebirth Vol. 1s Sampler is a great introduction to the first round of collected editions from DC's Rebirth event. This book contains seven different first issues. Included are Batman, Superman, Wonder Woman, Flash, Justice League, Nightwing, and Green Arrow. Reading all these different series in one place showed the variety that is included in the DC universe. The artwork is very different from series to series, and the writing styles vary as well.

Standout stories include Superman #1, Nightwing #1, and Batman #1. The status quo in these books has changed in the transition from the New 52 to Rebirth, and the new directions of these stories are interesting. Nightwing has returned to being a hero in costume, Batman has regained his memory, and Superman is adjusting to a new world with his wife and son.

The Justice League should be interesting as there are new characters filling the standard heroes rolls (two new Green Lanterns, a Superman from another world, etc.) The Flash is dealing with the return of Wally West, which was the impetus for the Rebirth event, and Wonder Woman is going through yet another origin adjustment, or so it seems. Finally, Green Arrow seems to be returning to his roots, and it reflects the tv show a bit more, as well.

Overall, I enjoyed having a chance to get a glimpse of how Rebirth was going to look. I recommend DC Universe: Volume 1s Sampler for anyone who may want to try out the new direction of these heroes before committing to their individual books.

I received a preview copy of this book from DC Comics and Netgalley in exchange for an honest review.
Posted by Scott at 6:31 AM