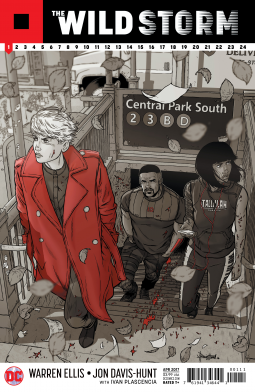 From the publisher: A troubled woman, barred by her employer from continuing her research, walks miserably through New York City. It takes her a moment to notice that everybody else is looking up. A man has been thrown from the upper floor of the Halo skyscraper.

And that woman—Angela Spica, sick from the transhuman implants she’s buried in her own body—is the only person who can save him.

What she doesn’t know is that the act of saving that one man will tip over a vast and secret house of cards that encloses the entire world, if not the inner solar system. This is how the Wild Storm begins, and it may destroy covert power structures, secret space programs and even all of human history.

To start with, I've enjoyed many of Warren Ellis's comics. He seems to tell stories on a very personal level while incorporating huge, crazy ideas (see: Stormwatch, Transmetropolitan, Moon Knight, etc.). Additionally, I've enjoyed reading many of the old Wildstorm books, particularly stories starring Grifter, the Stormwatch team, and Joe Casey's take on Wildcats. All that said, many of the more recent offerings, particularly when DC began integrating these characters into their regular universe, were a mixed bag. So, it was with held breath that I read Warren Ellis's The Wild Storm #1. I was very pleased to find that I enjoyed it, and look forward to reading future issues.

I can't really summarize this issue, as it's better read than explained. To be sure, this is very much a first issue, and it functions that way. Resetting many of the characters following the New 52 is going to take time and work. But Ellis does a fine job with this opening chapter in a his first arc. He appears to be starting slowly, introducing a few characters in this book, some of whom I recognized and some of whom I didn't. That's not to say it was slow, however. There was a lot of action and lot going on; Ellis shifted point of view characters several times, to expand the scope of the story. I'm looking forward to discovering/reading about Jack Hawksmoor, Grifter, and the Wildcats team in particular (I'm hoping they will be included as the story broadens).

I really enjoyed The Wild Storm #1. Ellis has written a good opening, and I trust him enough to see how this is all going to develop. I highly recommend this book, particularly to fans of the old Wildstorm books.