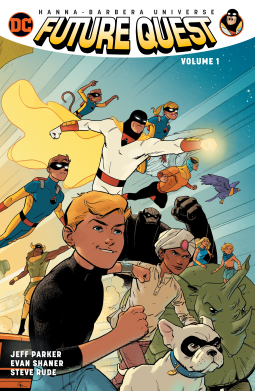 From the publisher: When worlds collide, it's up to Hanna-Barbera's most well-known adventure-seeking heroes to save the galaxy! Johnny Quest, Space Ghost, The Herculoids, and more are re-imagined here in this new action-adventure thriller!

When the adventurous and inquisitive Jonny Quest and his adoptive brother Hadji make a startling discovery in the swamplands of Florida, they are pulled into an epic struggle between the Space Rangers and a dangerous villain who threatens the galaxy. Now it's up to the combined forces of Jonny Quest, Space Ghost, The Herculoids, Birdman, Frankenstein Jr., The Impossibles, The Galaxy Trio and Mightor to stop him and save their universe! Collects FUTURE QUEST #1-6.

Jeff Parker's Future Quest Vol. 1 sounded like it would be a fun book. It had a lot of Hanna-Barbera characters that I have fond memories of. Creating a world threatening crossover that would bring them all together seemed like a nice chance to revisit the characters and have a nostalgic read. However, what I discovered is that I'm not really the audience for this book.

When mysterious portals begin opening around the world, particularly in Florida, Johnny Quest, Hadji, Race Bannon, and Dr. Quest begin to investigate. Birdman is brought in to help, as well. Dr. Zin and the agents of F.E.A.R. are trying to get ahold of the power source that is behind the portals. A quick jump takes the reader to other planets and universes where we discover that pieces of a world destroying creature called Omnikron is causing the portals, which it plans to use to take over the Earth. Meanwhile, the Herculoids, Space Ghost, and others are battling the creature where they find it. As events progress, more and more characters are brought together and the story expands its scope. Finally, the reader is left with a cliffhanger, as I assume there will be at least another volume of this series.

The art is nice and is very reminiscent of the animation from the various cartoons where the characters originated. There are also several short background features that provide more insight into characters who aren't given enough time in the main storyline.

Overall, I thought Future Quest Vol. 1 was just okay. Steve Orlando is doing a nice job, but I think this book is for younger readers. I was hoping for more depth to the story and characters. Also, there were way too many people to keep track of for my tastes, and the story didn't draw me in. I would definitely recommend this for younger readers (late elementary or middle school age).