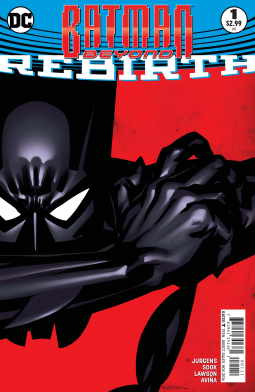 From the publisher: Six months have passed since the events of BATMAN BEYOND #16. While areas of destruction remain in the outside world, Gotham City has made great strides toward reclaiming its bright future. But new threats arise and old adversaries may be coming back. And the question still remains: whatever happened to Bruce Wayne?

I have only a passing familiarity with Batman Beyond, so Dan Jurgens's Batman Beyond #1: Rebirth is a great starting point for me. Terry McGinnis, aka Batman, is back from the "dead" and is back to protecting Gotham. He also has to reconnect to his former life, since everyone believed he was dead. As he fights the violent Jokerz gang, his former girlfriend is kidnapped and there is a nasty rumor floating around that the Joker may not be dead after all. Batman Beyond #1 is the opening act in a new adventure for Terry McGinnis, the Batman of the future. Plus, what happened to Bruce Wayne?

I enjoyed this book. It was a nice change to the typical Bat-books. Also, because many readers may not be familiar with Batman Beyond, Jurgens gives a recap of how Terry McGinnis became Batman. The way in which the information is presented is organic and does not feel forced. I really appreciated that approach. The art, by Ryan Sook, fits the book well and echoes the Batman Beyond cartoon from the early 2000's.

I enjoyed Batman Beyond #1: Rebirth. Dan Jurgens has gotten off to a good start, with both an immediate problem to be dealt with and long-term mysteries as well. This is a perfect jumping on point for readers new and old. I recommend the book to fans of all things Batman.