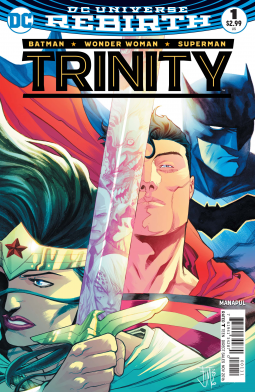 From the publisher: “BETTER TOGETHER” part 1! Together again for the first time! Batman, Superman and Wonder Woman. The core of the World's Greatest Heroes…but with a new Man of Steel, the bonds these three share will be tested and redefined by super-star writer/artist Francis Manapul. In this premiere issue, see the trio travel from Metropolis to Gotham City and beyond to learn what forces launched their heroic careers. But how will this journey of discovery lead them to a new threat?

Francis Manapul's Trinty #1 is a short but full story. It consists of Lois Lane, Clark Kent, Bruce Wayne, Diana Prince, and Lois and Clark's son Jon having dinner at the Kent farm. It functions as a simple introduction to these characters/heroes, who have known other versions of each other but are having some trust issues with each other.

I haven't read all the Rebirth stories of Batman, Superman, and Wonder Woman, so I think there are some relationship dynamics that I'm missing, but I enjoyed this book. I look forward to seeing how the story progresses. Done correctly, a series starring the "Big Three" can be outstanding and really delve into who they are and why they need each other. Trinity #1 shows this promise, and I'm excited to read future issues.

One last thing: Steve Wands's art is gorgeous. It is reminiscent of the style used on the Batman/Superman and Superman/Wonder Woman titles.

Trinity #1 is highly recommended, with an eye toward the future.

I received a preview copy of this book from DC Comics in exchange for an honest review.
Posted by Scott at 8:25 AM