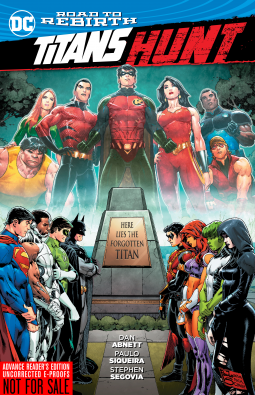 From the publisher: THE SECRET HISTORY OF THE TEEN TITANS REVEALED!
Robin. Wonder Girl. Speedy. Aqualad. Hawk and Dove. There was a time when these and other young heroes were synonymous with justice. They were the Teen Titans, one of the greatest superhero teams in the entire Multiverse…but that Multiverse has changed, and the time of the Titans has been wiped from the world. So why are Dick Grayson and Roy Harper—now better known as Nightwing and Arsenal—experiencing memories of a world they never knew? What compels them to hunt for an Atlantean named Garth and an Amazon named Donna Troy? What dangerous secrets connect them to a powerful stranger, a mysterious psychic and an odd couple—and what do those secrets mean for the fate of all life on Earth? Somehow, somewhere, somewhen, these men and women were Titans. Now the hunt is on for the force that can reunite them so the Titans can tower once more… One of the DC Universe's premier teams returns for the first time in years in TITANS HUNT! Join writer Dan Abnett and artists Paulo Siqueira and Stephen Segovia as they uncover the titanic mystery behind it all!  Collects TITANS HUNT #1-8, DC COMICS PRESENTS: TITANS HUNT 100-PAGE SUPER SPECTACULAR.

When DC started the New 52, one noticeable group of heroes was missing: the Teen Titans (or just Titans, now, since they are all adults). This was a group of heroes that had been around for decades and had an interesting and complex history. With Titans Hunt, Dan Abnett goes about bringing these heroes back into the DC mainstream, while also beginning the Rebirth event that spans all of DC's books.

Grayson, Roy Harper, Donna Troy, Garth, and the other Titans are living their lives, some as heroes, some as ordinary people. But all are having strange dreams and recognize that something is missing from their memory. As images, words, and people creep in from the fringes of their memories, they find themselves drawn together to the town of Hatton's Corner. There they are confronted by a creature known as Mr. Twister. In facing him, they find their memories and pasts restored, and are forced to confront the reasons why they forgot in the first place.

In addition to this story, Abnett also tells of Dick Grayson's (the original Robin) first adventure with the Justice League. It's a nice piece of background that also ties into the Titans Hunt storyline.

With Titans Hunt, Abnett has done a fine job of recapturing these heroes and bringing them back. I've never been a consist reader of the Teen Titans/Titans, so there were a few characters and aspects of the story I was unfamiliar with, but Abnett supplied the information that I needed to know to understand and enjoy the story. He provided some nice characterization (particularly with Nightwing, who makes a comment about all the identities he has had that doubles as commentary on the Titans missing memories). I also liked the scenes where the Titans began recalling who they were due to their interactions with each other.

The book concludes with a preview of the Rebirth story, in which Kid Flash (a former Titan himself) plays a major role. This short story is dripping with emotion and nostalgia as the Titans find themselves still missing their memory of one teammate. In a way, Titans Hunt was told in order to set up this Rebirth story, which paves the way for a return to much of the DC mythology longtime fans enjoy so much.

There is one last piece to the book. There are several pages of unfinished art from the story that show how Kid Flash was interacting with his former teammates even when they were unaware of him. It's a neat take on the typical idea of including unfinished pages from a story when collecting the issues in a book.

I recommend Dan Abnett's Titans Hunt. Longtime Titans fans will enjoy seeing the characters brought back. Additionally, this is a good starting point for those fans interested in the Rebirth event.