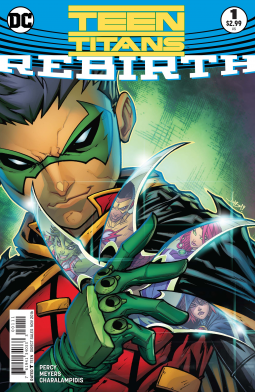 From the publisher: The Teen Titans are farther apart than ever before…until Damian Wayne recruits Starfire, Raven, Beast Boy and the new Kid Flash to join him in a fight against his own grandfather, Ra’s al Ghul! But true leadership is more than just calling the shots—is Robin really up to the task? Or will the Teen Titans dismiss this diminutive dictator?

Teen Titan's: Rebirth #1, by Benjamin Percy, opens with the various Titans on their own, some dealing with the fallout of events from the Batman books, some just trying to figure out who they are. As they each go about their days, they are attacked by a mysterious cloaked figure.

This issue does a fine job of laying the ground work for this newest incarnation of the Teen Titans. The reader gets a glimpse into the personalities of Beast Boy, Starfire, Raven, and Kid Flash. Percy provides just enough to create interest and add some depth without turning the story into an info dump. Jonboy Meyers's art is a great fit with the story, looking a bit cartoonish and young, which fits the characters.

Teen Titans #1: Rebirth is a great first issue, introducing the characters and setting up the story arc. I'm curious, based on the final panel, how the the Titans will react and where the story will go in the next issue. This is a series that bears watching, as the potential is there for a fun and interesting run. Highly recommended!

I received a preview copy of this book from DC Comics in exchange for an honest review.
Posted by Scott at 6:41 AM