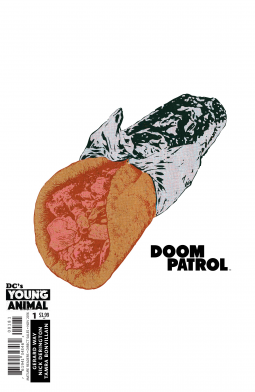 From the publisher: The atoms are buzzing. The daydreams crowd sentient streets, and the creative team has been warned, “Turn back now or suffer the mighty consequence of sheer, psycho-maniacal mayhem.” Generation-arsonists unite—this is DOOM PATROL, and the God of the Super Heroes is bleeding on the floor.

A blenderized reimagining of the ultimate series of the strange, DOOM PATROL combines elements from classic runs, new directions, and things that could not be. Our entry point is Casey Brinke, a young EMT on the graveyard shift to abstract enlightenment, with a past so odd that she’s not entirely sure what is real and what is not. Along with her partner, Sam Reynolds, the pair blaze a path through the city and its denizens, finding the only quiet that exists at 3am is the chaos of the brain. When the pair answer a hit-and-run call, they find themselves face to face with a familiar figure: Cliff Steele, AKA Robotman.

The pair’s only communication? Shouting out of the open windows while at high velocity. Who needs a new roommate? Who names a cat “Lotion”? And when do we get to see all those muscles?

Find your answers inside the pages of this comic book, as we set the stage for new beginnings, as well as the re-introduction of some classic DOOM PATROL characters, including Niles Caulder, Negative Man, Flex Mentallo, and Crazy Jane.

I have no words to describe Doom Patrol #1 by Gerard Way. It is weird, strange, bizarre, and colorful. It begins the set-up for the team to come together, but there is basically nothing in the way of explanation. This appears to be a book where the reader just jumps in and ultimately trusts that the writer will make things clear in time.

I was not a reader of the previous Doom Patrol book by Grant Morrison, but it would appear that Way's Doom Patrol is picking up with many of the "heroes" of that book. This is the first in DC's Young Animal imprint, but seems like it may have been a good fit with the Vertigo line of the 90's.

I don't know whether Doom Patrol #1 is a good book; it is definitely a unique book that I'm sure will find it's niche and appeal to a certain group of readers. However, I'm not sure if I fit in that group. I may give it another issue or two and hope I can begin to understand what's going on, but I'm not sold yet.

This is recommended to fans of Way's previous books, Grant Morrison's Doom Patrol run, and anyone looking for a comic that is different from the norm.