Who is John Galt?


About 12 years ago, I finished reading Atlas Shrugged by Ayn Rand.  At the time, it was the longest book I'd ever read, checking in at over 1000 pages.  Aside from the Bible, it remains the deepest and most dense book I've ever read (sorry Charles Dickens).  It is the story of Dagney Taggart, Hank Reardon, and other industry magnates who worked hard and created their fortune.  It is also the story of a government who takes it upon themselves to determine what is fair and how wealth should be distributed.  It was written 60-70ish years ago, but has been eerily reflective of the US in the last few years.

Tonight, I watched a the first film in a projected trilogy based on the book.  The acting was meh, the sets were so-so, but the story was king.  It is the kind of film/story that scares the progressives and social champions, because it advocates receiving payment based on your contribution, not merely because it's fair.  This might be an over-simplification, but it is Rand's Objectivist philosophy in a nutshell.  If you work hard and earn it, you should receive it.  Sharing the wealth should not be forced or regulated on society by the government, at a personal or professional level.  I should be able to buy Nissan or Toyota because of the excellent quality, and Chrysler and Ford shouldn't be bailed out because their products aren't good or their companies have been mismanaged.  I don't agree with all of Rand's ideas (I'm fairly certain she was an atheist, or at least didn't believe in a personal God), but I can get behind the idea that innovation and hard work should be rewarded, and laziness and lack of effort should not.

Email ThisBlogThis!Share to TwitterShare to FacebookShare to Pinterest
Labels: Movies

Somebody Grab Some Glue!

Sorry.  Cami lost her second tooth Saturday night.  I didn't lose my first one until 1st grade.  I'm so proud of my daughter.  She is advanced. 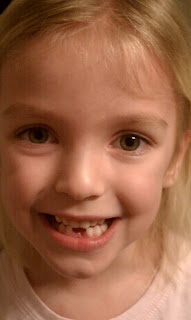 I have just spent a huge amount of time watching football.  New Year's weekend-ish is my favorite football time of the year.  Multiple bowl games on Saturday (of varying degrees), the NFL on Sunday (Tebow killed my fantasy team in the championship; he picked a bad time for a bad game), and even more bowl games on Monday (all the ones I watched were very exciting and came down to the end).  Now its time to run through the NFL playoffs and the BCS Championship.  Then, I'm free to watch regular tv.  I love football season.
Posted by Scott at 6:17 PM No comments: