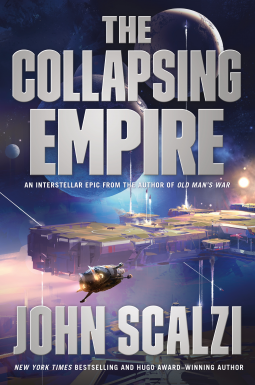 The first novel of a new space-opera sequence set in an all-new universe by the Hugo Award-winning, New York Times-bestselling author of Redshirts and Old Man's War

Our universe is ruled by physics. Faster than light travel is impossible—until the discovery of The Flow, an extradimensional field available at certain points in space-time, which can take us to other planets around other stars.

Riding The Flow, humanity spreads to innumerable other worlds. Earth is forgotten. A new empire arises, the Interdependency, based on the doctrine that no one human outpost can survive without the others. It’s a hedge against interstellar war—and, for the empire’s rulers, a system of control.

The Flow is eternal—but it’s not static. Just as a river changes course, The Flow changes as well. In rare cases, entire worlds have been cut off from the rest of humanity. When it’s discovered that the entire Flow is moving, possibly separating all human worlds from one another forever, three individuals—a scientist, a starship captain, and the emperox of the Interdependency—must race against time to discover what, if anything, can be salvaged from an interstellar empire on the brink of collapse.

I'm a fan of John Scalzi's Old Man's War series, so after a little indecision, I decided to give this new series a shot. And I'm glad I did. The Collapsing Empire was a fun and fairly quick read. There were interesting characters, political intrigue, multiple viewpoints, and enough of Scalzi's trademark humor and sarcasm to keep the mood from becoming too grim. Scalzi also does a fine job of keeping the plot moving along, so you never really feel like the story gets bogged down.

Quick summary: Humanity has spread throughout the stars thanks to something called "The Flow", which appears to be like a river (Scalzi's own description) that connects star systems. Without faster-than-light travel, the Flow is the only way for humans to settle other planets. All these communities are joined together as an Interdependency. The Interdependcy was created to keep humanity from fighting, making them all dependent on each other for survival (its somewhat more complicated than I want to describe here). Currently, the Interdependcy is ruled by an Emperox, who is a combination emperor-head of the church-businessman/woman (and maybe something else, I can't really remember). The Emperox has a council composed of military, church, and economic leaders to help them make decisions, but ultimately the Emperox rules over all. Then several things happen seemingly at once - the current Emperox dies; a rival trade house makes a bid for power; and the Flow begins collapsing. The biggest problem is the Flow, because without it humanity will be cut off from each other, resulting in the potential extinction of the human race.

The Collapsing Empire is the first of three books about the collapse of the Flow, the new Emperox, and humanity's struggle to avoid certain doom. With a little extra time to read, I found myself pretty engaged in this novel, and I'm looking forward to reading the next two and seeing where Scalzi takes the story.
Posted by Scott at 9:45 AM No comments: