So the Knight family started Spring Break with a night at Winter Jam 2014.  Top to bottom, it had the best line-up of any of these types of concerts we've been to.  The nights favorites included Thousand Foot Krutch (check out their video below), who's songs Lexi sang with them; Lecrae, who brought rap and preaching and mixed them together (check out his video below, too); The Newsboys, who still put on a just as good of a show as when I saw them 20 years ago (the drum kit went vertical, then horizontal, and then spun during their cover of Jesus Freak).  Special mention goes to Tenth Avenue North, who were freshmen while Trisha was in grad school at PBA, and Colton Dixon (a former American Idol contestant), who's poster Lexi is now a proud owner of.

If you like concerts and great deals, I highly recommend both Winter Jam and Rock and Worship Roadshow.  We sure have a great time at them.
This is "Let the Sparks Fly", by Thousand Foot Krutch.

Saturday, Griffin played in his first 3-on-3 tournament. His team came in second (out of 2).  He and his buddies (three 1st graders and a 5 yr old) lost to a team of 2nd graders.  It was a good learning experience, though.  Griffin realized he needed to be a little more aggressive.  Also, I think the boys struggled with the different format of playing half-court.  It was fun to watch him play and he was all smiles.

Lexi attended her first church retreat, something called CIY Superstart.  Lots of 4th-6th graders from our church gathered together with others from around the Indy area to learn that they are treasured by God.  It was a nice Friday night-Saturday afternoon program, with the kids sleeping at our church.  Trisha went along as a van driver and said it was a good time.

Cami got into the action on Friday when she rode the school bus home with a friend (1st time riding for anything other than a field trip).  She spent the afternoon and evening hanging out and being girly.

Finally, Griffin pulled out a tooth at school and was very excited to get a tooth necklace to keep the tooth in.

Me, I just finished giving the first round of state testing to my very unexcited students.
Posted by Scott at 9:14 AM No comments: 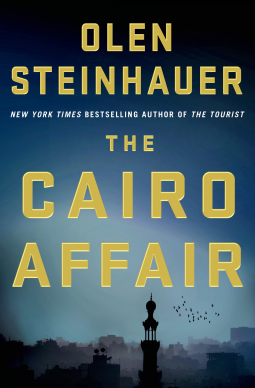 From the publisher: Sophie Kohl is living her worst nightmare. Minutes after she confesses to her husband, a mid-level diplomat at the American embassy in Hungary, that she had an affair while they were in Cairo, he is shot in the head and killed.

Stan Bertolli, a Cairo-based CIA agent, has fielded his share of midnight calls. But his heart skips a beat when he hears the voice of the only woman he ever truly loved, calling to ask why her husband has been assassinated.

Omar Halawi has worked in Egyptian intelligence for years, and he knows how to play the game. Foreign agents pass him occasional information, he returns the favor, and everyone's happy. But the murder of a diplomat in Hungary has ripples all the way to Cairo, and Omar must follow the fall-out wherever it leads.

American analyst Jibril Aziz knows more about Stumbler, a covert operation rejected by the CIA, than anyone. So when it appears someone else has obtained a copy of the blueprints, Jibril alone knows the danger it represents.

As these players converge in Cairo in The Cairo Affair, Olen Steinhauer's masterful manipulations slowly unveil a portrait of a marriage, a jigsaw puzzle of loyalty and betrayal, against a dangerous world of political games where allegiances are never clear and outcomes are never guaranteed.

Olen Steinhauer, the author of the Tourist trilogy, has another winner on his hands with The Cairo Affair.  This is a haunting and engaging story, in the tradition of the best of John LeCarre's work.  As the publisher's blurb states, there are four primary characters: Sophie Kohl, the wife of a U.S. diplomat; Stan Bertolli, a CIA agent based in Cairo; Omar Halawi, an Egyptian intelligence agent; and Jibril Aziz, a CIA analyst who's idea for a project called Stumbler sets everything in motion.  I would add one other character to the mix: John Calhoun, a contractor for the CIA, working in Egypt.

Using these five characters, Steinhauer weaves a story of betrayal and intrigue set during the Arab Spring, mostly in Cairo, Egypt.  He alternates his point-of-view characters, sometimes covering the same events from different view points.  This is a very effective technique, as it allows the reader fresh eyes and a new perspective on events.  Steinhauer's prose is never rushed, always moving along steadily, like a train heading towards it's inevitable end.  As the revelations are steadily doled out, the outcome becomes clearer, and the reader is left wondering how Steinhauer will tie everything together.  The answer? Successfully. Nothing seems forced, there are no cheats, and everything is explained.

This is not an action-packed book, nor is it a happy one.  A sense of sadness and loss permeates the story, with the consequences of spying very apparent.  It reminds me of the early Smiley stories by John LeCarre.

I enjoyed the setting of Cairo, as it was different from many of the spy novels I've read.  The setting was also very topical, set as it was against the background of the Libyan uprising.

Overall, I really enjoyed The Cairo Affair.  I would highly recommend it to fans of spy novels, particularly John LeCarre.

I received a preview copy of the book from St. Martin's Press in exchange for an honest review.
Posted by Scott at 6:57 AM No comments:

Lexi finished up her Upward Basketball season with an undefeated record.  She scored one basket, had a block, and made a really nice behind-the-back dribbling move in her last game.  I couldn't be happier with her on-court development this year, and neither could she.  It was a lot of fun watching both her skills and her confidence grow with each game.  She is already talking about playing school ball next year.
Posted by Scott at 4:14 PM No comments:

Thought of the Day

"We'll forget who we are if we forget who we were." From the book Something More Than Night by Ian Tregellis
Posted by Scott at 9:34 AM No comments: