Basketball Season is Over

Lexi had a total of four games this week. Her regular ("B") team won both games to finish the season undefeated. I'm not certain any game was closer than 10 points, with most being won by more than 20. This worked out pretty well for Lexi, as she was able to play a lot and had many chances to improve in game conditions. She dressed for the "A" team tournament, and the team finished in 3rd place. The first game was by far the worst the team played all year, but the bright side was a bunch of playing time for Lexi. She played point guard most of the time, and did okay. She had several drives to the basket but couldn't get anything to fall. The second game was the opposite, with the team blowing out their opponent. Again, Lexi played a bunch at the point. She made a beautiful entry pass to the post right at the end of the game that resulted in her teammates first basket of the year, and a pretty assist for Lexi. We are super excited at her improvement and growth as a player over the course of her multiple basketball seasons this year. She played all five positions at one time or another and learned a lot.

Now, we all take a breather for a couple of weeks before spring sports start.
Posted by Scott at 5:52 AM No comments:

This week Lexi just had one game (one was canceled due to weather). Her team won again, by a large margin. Lexi continued her hard work on defense and on the boards. She also was able to shoot a bit. She has her last two regular season games this week.

Cami's team won the league championship. In the two tournament games, she scored a basket, played good defense, and had a ton of assists. It was fun watching her improve each week, and the championship was a nice cap to a great season. Up next is softball.

Griffin's team played their tournament, and ended up playing three games. They won a close game on Thursday, and then a nail-biter to reach the championship. Unfortunately, they just couldn't get over the hump in the championship game, and finished second. Griffin has really come on strong and developed into a great defender. He also takes a lot of pride in rebounding, which leads to the majority of his shots (none fell in the tournament). He is a true hustle player. He had to outstanding plays in the semi-final game. In the first one, he saved a ball just as it was going out of bounds, which led to a basket late in the game. The second play led to the win. With about 15 seconds left, Griffin tracked down an offensive rebound about 10 feet out, pivoted, and hit an open teammate with a perfect pass, which became the winning assist when his teammate hit a basket with 10 seconds left. Those plays really summed up his growth as a player this year.

I'm very proud of my kids in their various basketball seasons. All worked very hard, and all three improved tremendously. Here's hoping Lexi's last week leads to another shot at a championship.
Posted by Scott at 8:52 PM No comments:

Lexi once again had a pair of games. Her team won both, but as a bonus, Lexi dressed and played in the "A" team game on Wednesday night. Lexi continues to carve out a niche for herself as a defender and a player who can play multiple positions. She took a couple of shots and played point guard a bit, but her offense is still a work in progress. She does a nice job hustling, tying up loose balls, getting to rebounds, and annoying people on defense. More games this week.

Cami's team won again. She did a fine job on defense, set good screens, and brought the ball up court a few times. She had a very nice drive to the basket off a screen, but her shot just missed. She also had several nice passes for assists. Next week is her tournament, where her team should be seeded first.

Griffin's team lost in another down-to-the-wire game. He was able to take a few shots, but mostly he did his work on defense. He is turning into a good defender, and is continuing to be aggressive for rebounds. He also played point guard and was very conscious of trying to involve his teammates with his passes. His tournament starts Thursday.
Posted by Scott at 7:35 AM No comments: 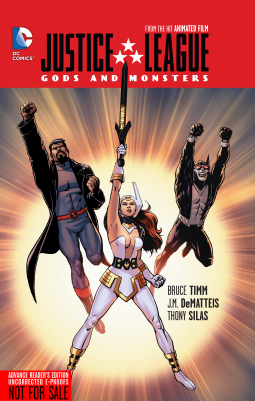 With Justice League: Gods and Monsters, J.M. DeMatteis is providing background to the versions of Superman, Batman, and Wonder Woman that star in the animated film JLA: Gods and Monsters. Having not seen the film, I'm looking at the stories purely on their own merits, rather than supplemental to the movie.

The origin of Superman is interesting. Rather than being found and raised by the Kents, Superman (Hernan) is found and raised by Mexican immigrants living in the U.S. This puts a different spin on how Superman develops into a hero. After injuring his sister in an accident, Hernan hides his powers until he is confronted by racist men in the town he is living in. This forces him on the run, where he does some soul searching, eventually running into a powerful Mexican cartel. What results is a very different type of Superman.

The Batman tale is the story of Kirk Langstrom, who tried to cure his lymphoma, but caused himself to become a vampire of sorts. He becomes the "Batman" and very violently hunts and kills criminals to sate his bloodlust. Along the way, he runs into Lew Moxon, a mob boss, and his enforcer Joe Chill. This is also the story of families, friends, and isolation. Again, DeMatteis has crafted a very different, but somewhat familiar, take on a hero's origin.

This interpretation of Wonder Woman focuses on Bekka, a daughter of the Highfather on New Genesis. She ended up on Earth and spent some time trying to better the world during the 60's as part of a commune, where Doctor Psycho is experimenting on hippies while trying to expand people's consciousness.  After a disagreement and confrontation, he vows revenge, while Wonder Woman becomes a public hero.

Batman, Superman, and Wonder Woman come together to investigate the mysterious Jackson Alpert, who has created a technology that upgrades people into the Forever People, basically better, more-super-powered versions of themselves. A conflict ensues, which results in the heroes facing Imperiex. As a result of this battle and the aftermath, Batman, Superman, and Wonder Woman form the Justice League.

I enjoy alternate versions of familiar heroes and villains, and Justice League: Gods and Monsters doesn't disappoint in this respect. Along with the three heroes, there are versions of Doctor Psycho, Lex Luthor, Lois Lane, Amanda Waller, and Steve Trevor. These inclusions help ground this new story in the familiar and give the reader a jumping off point and something with which to compare the new story.

I enjoyed J.M. DeMatteis's Justice League: Gods and Monsters. It wasn't my favorite alternate take on the Justice League, but it was entertaining. The groundwork is there for an interesting new universe of stories that are just familiar enough to hook the reader, but new enough to not feel like a retread. I would recommend this book.

I received a preview copy of this book from DC Comics and Netgalley in exchange for an honest review.
Posted by Scott at 6:46 AM No comments:

Lexi's team continued its undefeated ways with another blowout. Lexi played quite a bit. She missed her only shot, but that's not really the fun part about watching her play. On defense, her team played zone, and Lexi played up top, out on the wing, and the center post position. It's fun watching her match up with girls on defense and hustle. Two more games this week.

Cami's team won again. She played good defense and hustled on offense. My favorite play was when she picked up a loose ball and took it coast to coast for a nice layup right before the 3rd quarter buzzer ended. It looked very smooth.

Griffin's team lost a heartbreaker, on a free throw in sudden death (they had already played an overtime). He is a tremendous defender and is an animal when it comes to loose balls. He continued to collect rebounds, and took a couple of shots, one of which banked in, but didn't stay in the hoop. He has one more regular season game before the tournament.
Posted by Scott at 6:04 PM No comments:

Grayson Vol. 2: We All Die at Dawn by Tim Seeley - Book Review 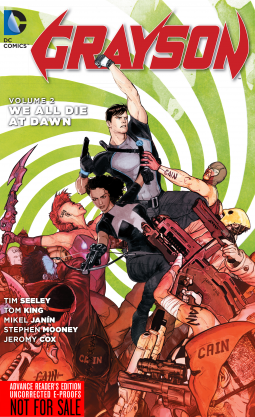 From the publisher: Grayson and Helena Bertinelli, a.k.a. Huntress, join together and take on some of their toughest foes yet. Dick is on a mission to stop Paragon from using the body parts of a dead villain to create something far more sinister, he goes toe-to-toe with the Midnighter, and he and Helena battle foes from their past--the Fist of Cain. Plus, a tie-in to FUTURES END!
Collects GRAYSON #5-9, and GRAYSON: FUTURES END #1.

Grayson Vol. 2: We All Die at Dawn, by Tim Seeley, picks up right where the first volume leaves off. Dick Grayson, Helena Bertinelli (both agents of the secret organization Spyral), and the Midnighter have formed an uneasy alliance while they attempt to track down and acquire the paragon organs. Midnighter wants to destroy them, while Spyral wants them under the explanation that they will help identify the identity of various heroes. This results in both chaos and cooperation between Dick, Helena, and the Midnighter, which consumes the majority of the story. Grayson is also full of the humor, action, and subversion of spy tropes (according to multiple reviews) that Seeley is becoming known for.

We All Die at Dawn is a fun action, adventure story that barely pauses for breath. It contains some big, crazy ideas (the Gardener, zombie Orcas with legs, the paragon organs) with some down-to-earth spycraft. Altogether, it is a winning formula. Seeley does a superb job of furthering his continuing story about Spyral's overall plan and essentially wraps up an arc concerning Director Minos. The conclusion of this volume also sets the stage for bigger things to come, both for Dick Grayson and for Spyral.

I highly recommend Grayson Vol. 2: We All Die at Dawn. However, this volume is not a good starting point. If you are new to the character or concept, grab the first volume or wait for the third one.

For clarification, the publisher's synopsis says that this volume contains Grayson issues 5-9, and Grayson: Futures End #1. However, the back of my preview copy states that it contains issues 5-8 and Grayson Annual #1. I'm not really sure which is correct, but I'm pretty sure that there is no Futures End tie-in in Grayson Vol. 2.

I received a preview copy of this book from DC Comics and Netgalley in exchange for an honest review.
Posted by Scott at 6:44 AM No comments: