Today Lexi's class had Dad's Day.  Dads were invited in to carve pumpkins and hang out with their kids for the last hour of school.  It was a blast.  Lexi designed our pumpkin (it's her as a pop star), while I carved it and scooped out the guts.  The kids also created books about their Dad and recited lines of poetry about Dads.  I recorded Lexi's group.  Enjoy the video and pictures.  I know I had fun today. 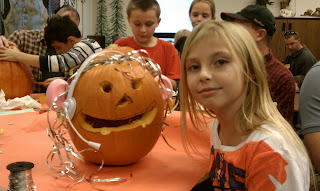 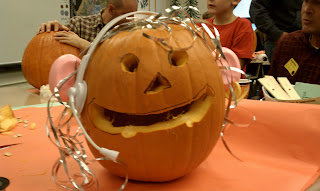 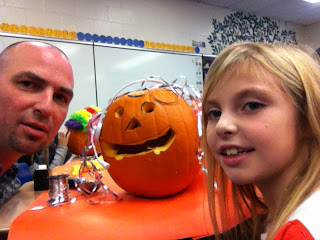 We have all been out of school the past two days and it's been fun hanging with the family. We did some shopping (I got an iPod touch! Whee!), played Batman Lego(which Griffin and I have almost solved, and by Griffin I mean me...it's addictive), and watched some
Obie's, including Captain America which was pretty good. Also listened to ONU blow out Iowa Wesleyan for their third win. I hope everyone enjoys their weekend
Posted by Scott at 6:49 PM No comments: 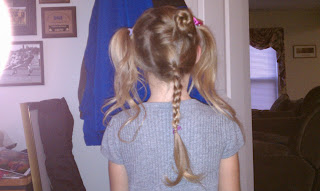 Picture of Griffin with Rod Redline 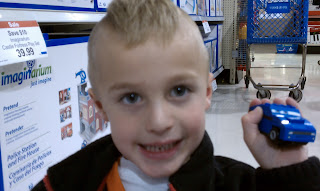 Friday night, I journeyed to Lakeville, Indiana to see Mark coach at his new school, LaVille.  His team played hard and had their best game of the year, but unfortunately came up short.  My buddy, Scott Smith (another former coach and fellow teacher) went with me, and we had a good time hanging out.

Saturday saw Lexi's final football cheerleading game of the year, and it was cold and windy.  I think it's a good time to be finishing up.  We were watching the Reddy girls, so there were 7 kids around to keep track of.  After the game, Tom and Donna took us all to Dunkin' Donuts for some hot chocolate and donuts and I think we filled half the restaurant.

Saturday afternoon, Griffin and I headed over to Toys R Us.  It was a surprise for him because they were hosting a special Lego building event (it reminded me of the Home Depot kids' clinics).  Griffin and I picked out all the pieces we needed to make a complementary Rod "Torque" Redline car from Cars 2.  We then put it together before we left the store.  Griffin was thrilled, partially because he likes Cars, partially because he likes Legos, and partially because he got to hang out with Dad.  We've also spent a large amount of time (too much) playing Batman Lego on the Wii.  It is highly addictive and I'll leave it at that.

Finally, I was able to watch the second half of the ONU game on my phone as it was streamed live.  It was pretty cool.  ONU won 38-7, for it's second win of the season, and Jeff's former player Michael Ho-Lewis rushed for over 100 yards and his first rushing touchdown.

It's been a nice weekend.
Posted by Scott at 8:42 AM No comments:

The Love and Respect Experience by Dr. Emerson Eggerichs is a devotional book based on Dr. Eggerichs's book Love and Respect.  It is divided into 52 separate readings of around 3-4 pages.  At the back of the book are discussion questions about each reading, so husbands and wives can discuss what they've read.

The devotional is subtitled A Husband-Friendly Devotional that Wives Truly Love, and I think that is where this book takes off.  The readings are non-threatening but still confront issues that face married couples.  Topics include what Eggerichs calls the Crazy Cycle, the Energizing Cycle, the the Rewarded Cycle, as well as how to recognize and accept male/female differences with such topics as Pink/Blue thinking, C-O-U-P-L-E and C-H-A-I-R-S, and definitions of what Love and Respect really are.  The book is set up to be read as a couple or individually, and then discussed with your spouse.  The 52 readings readily lend themselves to once-a-week discussions over a year, but are short enough that they can be done daily as well.  I've found the devotional readings informative at worst and full of helpful insight at best.  Each reading is also anchored to a passage of scripture, which keeps God as the focus of the marriage relationship.

Overall, I'd say this is an excellent book for married couples at any stage of their relationship.  Plus, it is truly husband-friendly.

I received a copy of this book from Thomas Nelson's BookSneeze program in exchange for my honest review.
Posted by Scott at 10:10 AM No comments:

Last Saturday, Trisha and I drove up to Olivet to catch the football game and a concert.  The game was okay.  The Tigers are playing better, but are simply out-manned.  They are currently playing with an all-freshmen backfield and lost their last upperclassman OL to injury during the game.  They competed for a half and then the game slipped away.  The highlight was visiting with Brian Fish's wife and two kids; his daughter, Culley, acted like Trisha was her long lost friend.  It was fun catching up with the Fish family (school of Fishes?).

After the game, we grabbed some Jimmy John's and rushed to Walmart, home to all things cheap and Chicago Bears.  We all got new t-shirts and we saw lots of cool Bears do-dads and gizmos.  Our Walmart only has Colt stuff, like they've been here forever (or at least since 1984).

We then headed back to ONU's new Centennial Chapel, which is beautiful.  It's a great place to catch a concert and I'm sure I could have read Sports Illustrated just as well there as I did in Chalfant Hall (I never missed a Chapel, though, Dad).  The concert was open seating, so like the old couple we are (at least like I am), we sat in the front row of the "balcony".  I didn't feel like standing up the whole time and wanted to record some of the concert on my phone (look below, although the audio is pretty bad).  We ended up with great seats.

The opening band was Atomic Tom.  They were a strange mix of 80's goodness and bad haircuts and mustaches.  They were entertaining, but the lead singer's banter and dancing was very mockable.

Next up was Anberlin, who I recently discovered.  They rocked! They are rock, alternative, emo, punk, with an alto lead singer.  They performed a great show, playing several of my favorites.  They also had the ONU drumline (all three members) perform on stage during one song, and went acoustic for a few songs in the middle.  They were definitely worth seeing.

Switchfoot ended the night, and it was awesome.  They were very polished and smooth.  They played mostly songs from their last two albums, with a couple of previous hits thrown in.  Their current songs are generally a lot edgier than the previous ones, which is a good thing if you ask me.  Jon Foreman, the lead singer, has an amazing way with words and writes great lyrics.  The melodies are catchy and easy to sing with.  During one song, two college kids held up a sign that said they knew how to play the song being sung, so Foreman called them on stage and gave them guitars (they did a fine job).  I thought that was pretty cool.

It was a great day.  On the way up, I told Trisha I wanted a little more than the standard song playing for the concert and I was pleased.  The two headliners changed arrangements and added a little something you only get in concert.  Also, Trisha played solitaire on her phone for most of the Switchfoot concert.  I'm not the only one too lame to party with the kids down near the stage.

The first video was Switchfoot's last song, "The Sound".  The second video is Anberlin's song "Impossible".
Posted by Scott at 5:03 PM No comments: