Next to Last Stand by Craig Johnson - Book Review 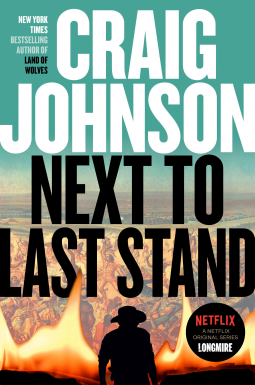 From the publisher: One of the most viewed paintings in American history, Custer's Last Fight, copied and distributed by Anheuser-Busch at a rate of over two million copies a year, was destroyed in a fire at the 7th Cavalry Headquarters in Fort Bliss, Texas, in 1946. Or was it? When Charley Lee Stillwater dies of an apparent heart attack at the Wyoming Home for Soldiers & Sailors, Walt Longmire is called in to try and make sense of a piece of a painting and a Florsheim shoebox containing a million dollars, sending the good sheriff on the trail of a dangerous art heist.

Next to Last Stand is the latest in Craig Johnson's terrific Walt Longmire series, and it's a nice change up from the past few stories, which all dealt with some really heavy topics and subject matter. I read somewhere that Johnson wanted to give Walt a reprieve of sorts and Next to Last Stand does that, without taking anything away from the challenges and risks that Walt and his crew face.

Next to Last Stand kicks off with the death of a Charley Lee Stillwater, a veteran who had been living at the Wyoming Soldiers' and Sailors' Home. In the process of going through his things, $1,000,000 and what looks to be an old painting are discovered. This intrigues Walt, who begins the process of trying to discover where the money came from and the authenticity of the painting. This leads Walt to the story of Custer's Last Fight, a famous painting that was destroyed in a fire but prints of which are in bars all across America. Things go from there, fairly quickly at times.

One of the highlights of the Longmire series, for me, is the characters. Next to Last Stand involves many of the usual group: Sheriff Walt Longmire, of course, a little older, a little more beat up, and still recovering from a near death experience; Vic Moretti, the undersheriff, foul-mouthed, sassy, and a take-no-prisoners attitude; Henry Standing Bear, a Cheyenne and Walt's best friend, a steady influence; and Ruby, Walt's dispatcher and de facto organizer. Throw in a "Count" who has a shady past but a lot of knowledge about art; his assistant; his ex-KGB bodyguard; and some colorful vets at the Soldiers' and Sailors' Home, and you've got the makings of a classic Walt Longmire mystery.

Johnson's Longmire books always have an intriguing mystery, but part of the joy of reading these stories is the knowledge of Wyoming and the Big Horn Mountain area that comes in to play. This time, there is a focus on Gen. George Custer and the Battle of Little Big Horn. Johnson, usually through Walt and Henry, loves to share his passion for his home state (and the bordering states) with his readers. I always pick up a little knowledge, and enjoy Walt's sort of non-stereotypical characterization as an educated (particularly literature and history) man, rather than just all action-oriented.

Overall, Next to Last Stand by Craig Johnson is another enjoyable Longmire book. I always enjoy the opportunity to spend some time with Walt, Vic, Henry and the other denizens of Absaroka County Wyoming. I would recommend this both to longtime readers of the series and also to new readers, as it would be a fine read all on its own.

I received a preview copy of this book from Penguin Group publishers and Netgalley in exchange for an honest review.
Posted by Scott at 6:42 AM No comments: