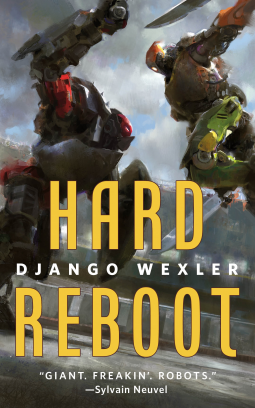 From the publisher: Django Wexler's Hard Reboot features giant mech arena battles and intergalactic diplomacy. When did academia get to be so complicated?
Kas is a junior researcher on a fact-finding mission to old Earth. But when a con-artist tricks her into wagering a large sum of money belonging to her university on the outcome of a manned robot arena battle she becomes drawn into the seedy underworld of old Earth politics and state-sponsored battle-droid prizefights.
Is it time to get back to the books, yet?
I recently finished Django Wexler's Shadow Campaign series (a fantasy version of Napoleon's career) and enjoyed it. I also enjoy a good giant robot/mecha suti of armor story. So, when I read about Wexler's newest book (novella, really) I decided to give it a chance.
Hard Target takes place way in the future, when mankind has left Earth far behind for the most part. People are constantly plugged in to a future version of the internet through a neural net implanted in their head. And the Scholarium is interested in studying everything about the past. Scholar Zychtykas Three (better known as Kas) is a junior researcher studying old computer codes. She finagled her way onto a field research team headed to "Old" Earth. While there, she plans to study battle mechs/robots and their code structure. However, Kas doesn't really fit in with the rest of her group. Zhi is a mech pilot from a really rough part of town. She cons Kas into betting a lot of money on Zhi in a mech fight, and the worst possible outcome occurs. As the two try to set things straight, they realize that working together they might both achieve their goals.
Hard Target is an interesting story. The selling point for me was the mech battles, but really, that isn't much of the story. Most of it is Kas and Zhi trying to get out of the deep trouble each seems to find themselves in. Wexler does a nice job of developing both characters as much as he can in such a short story, and there are several twists as the plot moves towards its climax. His writing propels the story along, with a few slow spots.
High points: I enjoyed the few mech battles. I like Wexler's writing style in general.
Low points: The names, slang, and a few other strange words kept throwing me out of the story. I don't mind creative vocabulary, but it was enough of a distraction in Hard Target that I nearly quit reading. The story stalls a little when it becomes exposition-heavy. Additionally, there is a same-sex relationship that didn't really seem necessary to the story.
Overall, Hard Target by Django Wexler was a decent story. It excels when it focuses on the mechs and Kas and Zhi working together, but drags in the other parts.
I received a preview copy of this book from Macmillan-Tor/Forge and Netgalley in exchange for an honest review.
Posted by Scott at 9:27 AM No comments: 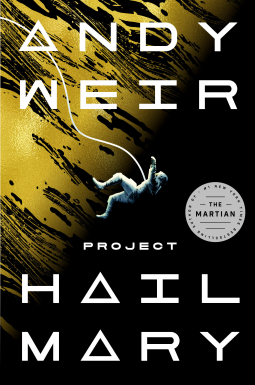 From the publisher: Ryland Grace is the sole survivor on a desperate, last-chance mission—and if he fails, humanity and the earth itself will perish.
Except that right now, he doesn’t know that. He can’t even remember his own name, let alone the nature of his assignment or how to complete it.
All he knows is that he’s been asleep for a very, very long time. And he’s just been awakened to find himself millions of miles from home, with nothing but two corpses for company.
His crewmates dead, his memories fuzzily returning, Ryland realizes that an impossible task now confronts him. Hurtling through space on this tiny ship, it’s up to him to puzzle out an impossible scientific mystery—and conquer an extinction-level threat to our species.
And with the clock ticking down and the nearest human being light-years away, he’s got to do it all alone.
Or does he?
An irresistible interstellar adventure as only Andy Weir could deliver, Project Hail Mary is a tale of discovery, speculation, and survival to rival The Martian—while taking us to places it never dreamed of going.
Andy Weir's first book, The Martian, was a huge hit about an astronaut stranded on Mars and the effort to rescue him. It resulted in a movie that was also a hit. His second book, Artemis Moon, was a mystery on the moon and didn't get quite the same attention but it was an enjoyable story. Now, with Project Hail Mary, Weir returns to a similar situation as The Martian. The result? A good read that doesn't quite recapture the incessant readability of his first book.
Ryland Grace wakes up to find himself alone on a spaceship with no memory of who he is or why he is there. Through trial, error, and patience, he begins to recover his memory and figure out just what is going on. And much to his astonishment, he realizes that he is the only hope of saving Earth from certain doom and he might not be qualified for the task.
Project Hail Mary is told in both the present time and with flashbacks, as Grace's memory returns in fits and spurts. This helps to put his present situation in context and provides Weir the opportunity to make several important reveals that wouldn't have near the impact if the story was told in a straight linear style. There are also several twists and turns that keep the reader guessing as to just how this story will turn out.
Weir has created a relatable character with Ryland Grace. I don't want to reveal too much and spoil it, so I'll just say that the first person narrative and Grace's self-deprecating humor work really well. I felt invested in Grace's struggle to figure out who he is and his quest to save humanity.
The story is also entertaining. There are enough twists to keep things interesting and Weir's writing style carries the reader along. Additionally, I never quite felt sure about how things would turn out and I did not see the ending coming in advance. I appreciate that because many books telegraph the resolution well in advance.
Overall, I enjoyed Project Hail Mary. While not on the level of The Martian, it was still an intriguing story with an interesting premise and protagonist. I would recommend it to fans of Weir's other books.
I received a preview copy of this book from Random House Publishing - Ballantine and Netgalley in exchange for an honest review.
Posted by Scott at 11:15 AM No comments: 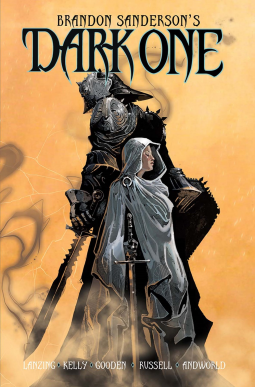