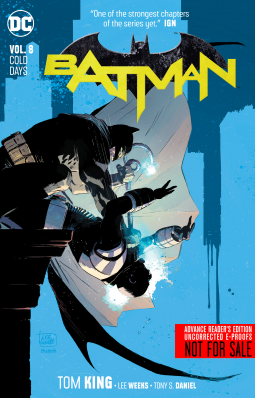 From the publisher: Author Tom King pens the next epic volume of his critically acclaimed, best-selling Batman series in Batman Vol. 8!

In the aftermath of the wedding of Batman and Catwoman, the Dark Knight's life has changed completely. Having walked down the aisle, how will this new Bruce Wayne view himself? What is to become of Batman now?

Batman Vol. 8: Cold Days by Tom King picks up following the events of the Batman/Catwoman wedding. Rather than deal with his heartache, Batman starts to go off the deep end, beating Mr. Freeze viciously to get him to confess to three murders, before leaving him to be arrested. The first arc of this book follows the trial of Mr. Freeze, where Bruce Wayne happens to be selected to be a member of the jury. Over the course of this arc, King intersperses Batman's actions with Bruce's interactions with the other jury members. We end up with a fairly deep meditation on how our feelings cause us to react, whether the end justifies the means, and what Batman's responsibility to justice really is.

The next story is a heartwarming one. King juxtaposes Dick Grayson's early days (following the murder of his parents) with Bruce Wayne trying to comfort him and help Dick process with the present day Dick trying to return the favor to Bruce. This is a terrific character piece and really showcases the father/son relationship between Bruce and Dick.

The final story arc of this collection focuses on the return of the KGBeast. This vicious Russian assassin shows up in Gotham again, looking for revenge against Batman. After attacking a member of Batman's inner circle, Batman begins tracking the Beast, looking for vengeance.

King continues to delve into the heart of Batman, and while his stories have plenty of action, they are incredibly deep, taking a good, hard look at what kind of man Bruce Wayne is, along with examining many of Batman's inner circle. Another terrific part of this book (and the past couple) is King laying the groundwork for a much bigger story to come. Many of the recent events in Batman/Bruce Wayne's life have been orchestrated as part of brutal attempt to destroy the him, and they have been put together by one of Batman's most dangerous foes.

Batman Vol. 8: Cold Days is another excellent book by Tom King, who continues an amazing run on Batman. King is fast growing into one of the most important writers of Batman. I highly recommend this book, to Batman fans and to fans of Tom King's writing.

I received a preview copy of this book from DC Comics and Netgalley in exchange for an honest review.
Posted by Scott at 1:11 PM No comments: 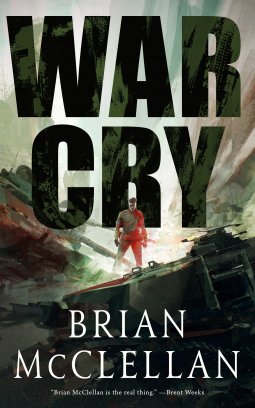 Teado is a Changer, a shape-shifting military asset trained to win wars. His platoon has been stationed in the Bavares high plains for years, stranded. As they ration supplies and scan the airwaves for news, any news, their numbers dwindle. He's not sure how much time they have left.

Desperate and starving, armed with aging, faulting equipment, the team jumps at the chance for a risky resupply mission, even if it means not all of them might come. What they discover could change the course of the war.

I've put off writing this review for about 6 months, mostly because I didn't know what to write. I really enjoy Brian McClellan's Powder Mage stories (both novels and short stories), so I expected to like War Cry as well. This novella length introduction to the world of War Cry had an interesting premise. However, something in it just didn't connect with me. I'm not sure if it was the characters, the short format (which prohibited full immersion in the world), the writing style, or some combination of all of that.

War Cry follows Teado and his squad as they try to wait out the enemy, in a war that has been going on for years. Teado is a shape changer, and other members of his squad have powers, too. But, none of them really stuck with me; I don't have a lasting impression of any of the characters. I remember a few of the details of the story (a battle, a plane crash, a long journey across the wilderness) and an somewhat interesting, yet bittersweet, ending. There was definitely potential there, and plenty of room for more stories. I would probably even give this world another shot (after all, I didn't get totally sucked into the Powder Mage series until the second book).

Overall, I would give War Cry by Brian McClellan an average rating. It was just okay. As an introduction to a new world, it was alright, but didn't capture my imagination. It actually seemed like a story that had been written for a themed short story collection - Book of Swords; Unfettered - that type of thing). Anyway, if you enjoy Brian McClellan's writing, you should give it a shot; you might connect with it more than I did.

I received a preview copy of this book from Tor Books and Netgalley in exchange for an honest review.
Posted by Scott at 1:09 PM No comments:

From the publisher: Max is not having the best year of his career. Sales on his comics series are tanking, and his personal life is crumbling. Could it have something to do with his double life as a spy? Max learns the definition of “in too deep” as his worlds start to collide.

COVER is a major new project from longtime collaborators and Peabody Award winners Brian Bendis and Emmy-nominated artist David Mack. It’s a heartfelt valentine to comics creators, their creations and the genres they inspire.

Brian Michael Bendis's Cover #4 seems to wrap up the Max Field's initial adventure (if you can call it that) in the spy trade. The story continues with Max's torture and interrogation by fellow comics artist Essad Sinns. Fortunately for him, he is rescued, but finds himself stunned when he has to return to the Con and act like nothing happened. When he returns home, he crashes with his good friend Owen James and proceeds to relate what he has been through.

Once again, David Mack's art is beautiful. The style really fits the story.

I really like this book. It is fun, entertaining, and engaging. I'm not sure if there is a bigger story Bendis and Mack will be relating as the series moves along, but I'm in for the long haul. Max's cluelessness makes him an easy character to root for, and I'm curious to see how he develops as he experiences more of the spy life. I also really enjoy the glimpses at the art and stories of the fictional comics creators. I think I would really enjoy Ninja Sword Odyssey, Berlin Squad, etc.

Cover is a terrific book, well worth picking up. It's unlike anything on the shelf, and is a great read. Plus, since the characters are somewhat based on Bendis and Mack, I try to imagine the conversations they have regarding the circumstances their fictional counterparts are going through. Maybe a conversation between the two for the collected edition?

Additionally, this issue contains a reprint of the short comic-style tribute to Stan Lee that Bendis wrote for the NY Times. It is a sweet reflection on Bendis's relationship with Lee.

I received a preview copy of this book from Jinxworld and DC Comics in exchange for an honest review.
Posted by Scott at 8:03 AM No comments:

From the publisher: The Dreaming has a new master.

As its rightful steward, Lucien, wrestles with the slow decay of his mind, the realm of wonders slips into totalitarianism beneath the thunderous gavel of Judge Ezekiel Gallows.

But as the gates are fortified and the citizens terrorized by a foul new form of execution, something far greater and more terrifying slouches toward the Dreaming to be born.

With nowhere else to turn, it’s time to seek the counsel of the Endless...

With The Dreaming #4, Simon Spurrier begins to make some headway. There are several stories going on in the issue, and it appears that they may all converge soon. First, Cain has leapt into the chasm that appeared in The Dreaming, and has a revealing conversation with an as-yet-unknown character. There is some interesting depth to this dialogue, as Cain is forced to take a hard look at his past. Elsewhere, Judge Gallows is conducting a public execution in order to cement his rule by fear. Yet, when Lucien shows him to the gallery of the Endless, they notice a strange occurrence: a new Endless is being created. (This might be my favorite thing in this new series so far, because it reminds me of the type of thing Gaiman did in Sandman). Finally, Dora and Matthew the Raven decide to make a run for it, and where they end up may have longer term consequences in the realms of the Endless.

More than any other issues of The Dreaming to this point, I really enjoyed #4. And the reason is pretty simple: it has more of what made the Sandman so great. Spurrier is beginning to connect the threads of his story (which is still in its early stages, I know) to the greater mythology that exists in the world of the Sandman. And if my first guesses as to what the end of this issue mean are correct, we could be heading towards an epic Sandman-type story, more in the vein of how Dream died and a new Dream assumed the title. If that is indeed the case, or even if it's only partly right, then The Dreaming may shoot right up to the top of my To Be Read pile.

I highly recommend The Dreaming #4 by Simon Spurrier. Longtime Sandman/Endless fans will find a lot to like in this issue. I'm now anxiously awaiting issue #5.

I received a preview copy of this book from Vertigo and DC Comics in exchange for an honest review.
Posted by Scott at 6:48 PM No comments:

From the publisher: The critical and commercial hit series by Geoff Johns and Gary Frank continues following the shocking revelations of last issue. As the truth behind Dr. Manhattan’s actions against the DC Universe are revealed, Ozymandias turns to the only being who can stop him: Superman.

Upon finishing reading Doomsday Clock #8 by Geoff Johns, I'll say that again the issue summary is misleading. There is no mention of Dr. Manhattan and Ozymandias barely appears in this issue. Rather, the story focuses on Firestorm and Superman. Firestorm goes to Russia in a fit of anger, and a tragedy ensues. Superman, ever the peacemaker and representative of the world, tries to help resolve the problem. But sometimes things do go as planned...

Johns continues to spool out the huge story he is telling in Doomsday Clock. At this point, he is doing an excellent job of juggling the various characters and storylines. To me, it's hard to develop characters much with a story this large, so in my opinion, not much is being revealed about the various characters. On the other hand, this is turning out to be a truly world changing series, with the world on the edge of a massive war and metahuman heroes and villains facing persecution and death.

According to the issue blurbs, Johns is revealing more and more of Dr. Manhattan's plans, but at this point I have no idea what the endgame is, and multiple issue summaries have been flat out wrong. However, I will trust Johns to tell a good, complete story. With only four more issues, there is a lot that needs to be resolved. I'm anxious to see how everything is going to turn out. To that effect, I recommend Doomsday Clock #8 by Geoff Johns.

I received a preview copy of this book from DC Comics in exchange for an honest review.
Posted by Scott at 6:37 AM No comments: