Griffin's team won by scoring an extra point on the last play of the game.  Cami cheered hard.  Enjoy the videos of the kids in action.

I tried to center it on Griffin but its a little hard to tell.  Look for the glasses or the number 2.

Cami is excited to cheer.

Curtis Eichelberger's Men of Sunday is not what I thought it was going to be.  That's not to say its bad; its just not what I expected.  Typically, the sports/Christianity books I've read tell the story of an athlete/coach/team and their faith may be mentioned to varying degrees.  Reading the names of the NFL players and coaches associated with this book, I expected much of the same.

Instead, I ended up with something completely new, at least in my opinion.  Men of Sunday isn't simply how various people in the NFL are Christians.  It deals much more with the role of faith in the NFL, using the people as examples.  As I read, I kept trying to figure out how I would describe Men of Sunday to someone and I was continually stumped.  What I've come up with is this: Men of Sunday is a book for people involved with, or soon to be involved with, professional football.  It reads almost like a blueprint or workshop wherein the role of faith in all aspects of NFL life is described.  Eichelberger interviewed hundreds of current and former players, coaches, and the wives of players.

Chapters include discussions about how a Christian can play such a violent game; how players (and their wives) use faith as a guard against groupies and other poor lifestyle choices; how wives use Bible studies to strengthen their families; the role faith plays in the transition from player to civilian; and how faith helps players deal with unexpected tragedy in their lives.

I found myself liking some of the chapters more than others, simply because of my interest level in the topics discussed.  One highlight for me was reading about Ray Lewis's view on servant leadership.  Also, Trent Dilfer's heartbreaking story about the loss of his son is worth the price of the book.  Rarely do you see an athlete open up so completely about something so personal.

Overall, Men of Sunday was an interesting read.  I would recommend it to people involved with the NFL, or people who are really curious about how faith works in professional football.

I received a copy of this book from Thomas Nelson Publishers in exchange for an honest review.
Posted by Scott at 4:46 PM No comments:

Enjoy the posted pictures and videos.  The kids had a blast. 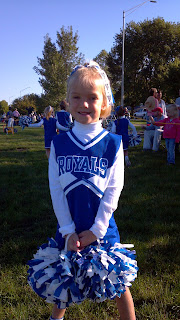 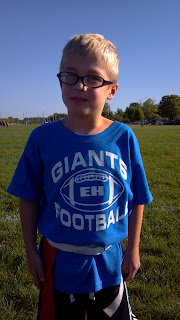 Since Cami and Griffin learned to ride without training wheels and I got a new bike (Cami - "YOU can ride a bike?), we've been going on family bike rides around the neighborhood.  Griffin now rides like he was born to it, which is strange because he was the most resistant to learning how.  Cami, on the other hand, prefers to ride as short a distance as possible before stopping.  She has no desire to practice and build endurance.  I guess she figures she knows how to do it, and that is good enough.  Enjoy the video.

Lexi was the only one of the kids with a game yesterday.  Cami and Griffin had a bye.  Enjoy the video below. (Mom, you have to visit the blog to see the video.  It won't show up in the email update.)

Impact Player is a memoir by Bobby Richardson, the former 2nd baseman for the New York Yankees.  Richardson played from the late-50's through the mid-60's, during the heyday of the Mantle, Ford, and Maris teams.

Aside from knowing his name, I knew nothing about Richardson prior to reading this book.  I wouldn't say I was fascinated, but his insider's view into the Yankees was pretty cool.  After giving a brief background of his life prior to playing pro baseball, including his early commitment to Christ, Richardson gives an overview of each season he spent in the minors or with the Yankees.  He is a humble man, so his stories seem very toned-down compared to what a more ego-driven player might write.  He also is very careful to paint his teammates and competitors in a good light.  I often found myself wondering if he was sugar-coating his words, because I'm so used to people trying to place blame on others and build themselves up.  But, having finished the book, I believe that this is just representative of who Bobby is as a man of God.

The last several chapters detail Richardson's life after baseball, with the most interesting chapters containing his memories and friendships with his former teammates, including Tony Koubek, Roger Maris, Clete Boyer, Moose Skowron, Yogi Berra, Whitey Ford, and Mickey Mantle.  In fact, it is his friendship with Mantle that forms the frame for Richardson's story.  Opening with Richardson about to speak at Mantle's funeral, the final chapters bring home the fact that Mantle became a Christian shortly before he passed away and Bobby's witness was instrumental in that.  Richardson emphasizes how his platform of baseball (and ours in whatever we do) can and should be used to spread the message of Christ.

This book isn't the story of the Yankees' inner-workings amid a very successful run in baseball.  It is the story of one man trying to live for God while playing the game he loves.  It is definitely worth a read for sports fans, and maybe for the casual Yankee fan.

I received a copy of this book from Tyndale House Publishers in exchange for an honest review.
Posted by Scott at 9:21 AM No comments:

Last night, the kids and I attended Meet the Teacher Night at the elementary school.  Lexi proudly showed us her room (her teacher is the wife of a former player of mine).  Then we trekked to see Cami and Griffin's room.  They gave us the grand tour, and explained many words and stations to me.  While we were there, a little girl waved and said, "Hi, Griffin."  I could barely get him to respond, and he said he didn't know her name (Cami did).  Today he told me, "A girl from my class kissed me, but not on the cheek."  I started to get nervous.  "Where did she kiss you?" I asked.  "Like this," he said, and motioned blowing a kiss.  I asked who it was and he said, "Remember the girl who said hi to me?  She did it on the second day."  We talked about being nice to everyone, but not kissing people who aren't related to you.  Then Griffin stated, "The Bible says to love everyone."  I couldn't argue with that.

From the Perspective of a Kindergartener (or 2)

Apparently, Kindergarten is really all about Specials (library, music, P.E., art, etc.) and recess.  The first things I hear from the twins are usually concerning one of those items.  Griffin refers to most people as "that guy who..." ex: that guy who had to pull his behavior card.  Cami knows the names of several little girls.  Griffin talks about "The Chaser", a boy who chases kids at recess.  I asked Griffin why he was being chased, and he answered, "I said, 'Well, well, well, what do we have here' to him, and he chased me."  As of yesterday, the Chaser had kicked Griffin, gotten threatened with loss of recess, and has joined the "good team" according to Griffin.  Griffin now counts him as a friend, to which I cautioned, "If he starts to get in trouble, don't hang around him."  Griffin sang in music class and was given a small award thanking him for performing.  Cami just likes school.  If only they would tell me what they are learning.  Or maybe they are.
Posted by Scott at 4:48 PM No comments:

Today was the first day of the school year, and the first day ever for Cami and Griffin.  They were so cute and so big with their backpacks and lunch boxes.  It was very exciting for me to have them come to my room after school was over.  The twins had a good day, telling me about new friends (names have been forgotten) and how they did not have their behavior cards pulled.  Lexi is settling in with a group of kids she really hasn't been in class with before.  We are all exhausted. 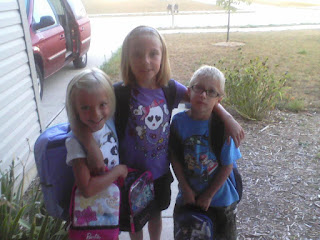