The End of One Year and the Beginning of Another

Alienation is the second book in the C.H.A.O.S. Trilogy.  The first book, Invasion, was entertaining.  Alienation is more of the same.  The book is very fast paced, with short chapters and lots of action.  Colt McAlister, along with his friends Oz and Danielle, are heading to the C.H.A.O.S. Academy for training.  They will be joining a group of recruits who will defend the Earth against invasion by the Thule, six-armed aliens from one of the twelve known worlds.  What Colt doesn't know is that he has been marked for death by someone inside C.H.A.O.S.  Even though this is the second in a trilogy, the story is resolved while laying the foundation for the final book.

Some observations:  This is a quick read, and the first book appealed to some of my students.  It is full of comic-book type action, with jet packs, aliens, secret bases, and conspiracies.  The characters are a little two-dimensional, but are showing some growth.  I feel like a subplot concerning Colt's "girlfriend" from the first book was rushed or tacked on; it either needs to be eliminated or fleshed out more.  Also, with only one book to go, I'm curious how the potential invasion will be dealt with.  There is a lot of room for sequels or other series and I'd be interested to see Colt's world expanded on.

This was an entertaining book, and I'd recommend it particularly for 10-16 year old boys, although anyone could enjoy it.

I received a copy of this book from Thomas Nelson's BookSneeze program in exchange for my honest review.
Posted by Scott at 12:07 PM No comments:

Here is a video of Cami and Griffin playing Joy to the World as part of the preschool bell choir.

Last winter, PBS showed three 90 episodes of the BBC's Sherlock tv show.  It takes Holmes and Watson and puts them in a modern setting, as opposed to the recent movies that kept them in their original time.  I watched two of the three episodes over the past couple of days thanks to DVDs from the library.  I've got to say, they were great.  The actors are fantastic and the stories ring true to traditional Sherlock Holmes mysteries.  The interaction between the two main actors is fantastic, reminding me a bit of Gus and Shawn from Psych, minus the pop culture references.  I highly recommend this if you can find it (it may be on youtube or another website).

My favorite line:  Policewoman (referring to Holmes), "He's a psychopath."
Holmes (in response), "That's high-functioning sociopath, please."
Posted by Scott at 10:36 AM No comments:

Email ThisBlogThis!Share to TwitterShare to FacebookShare to Pinterest
Labels: Television

Griffin (Clark Kent) with his glasses. 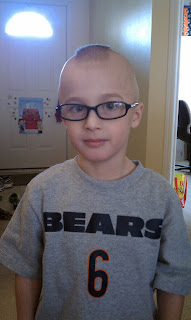 Lexi signing at school. (She is in the middle in a white shirt; the video is as close-up as I could get it) 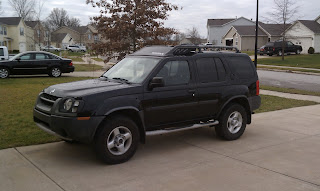 Its been a busy couple of weeks with Christmas parties, programs, Griffin getting glasses, and getting a new car, so I'm sorry for no updates.  I have at least one book review, one picture of Griffin, a picture of the new Xterra, and Lexi singing in her program to post over the next couple of weeks, with new stuff I'm sure I'll add as well.  In the meantime, enjoy the Christmas season.
Posted by Scott at 7:08 PM No comments:

Email ThisBlogThis!Share to TwitterShare to FacebookShare to Pinterest
Labels: stuff

I received this video through my All Pro Dad daily email.  It's pretty funny and impressive.