Tyndale House Publishers are having a contest to celebrate the latest book from Kevin Leman, titled It's Your Kid, Not A Gerbil.  To see the contest, click here.
Posted by Scott at 7:01 PM No comments:

Last night, I took the kids (Trisha had to work) to the ONU vs. Marian College football game.  It was my friend Brian Fish's first game as head coach.  ONU lost, but played hard.  They were simply out-manned, but that should change as Fish keeps recruiting and the large number of underclassmen who played last night gain experience.  It was fun to see the Tigers playing again, and Brian brought back "Fight On" and began team afterglows (or whatever he is calling them) after the game.  I'm confident he'll get the program turned around.

It was also fun to visit with some old friends, catch up, and reminisce.  I spent a large part of the game watching my kids running around having fun and talking to Mark and to Jared Slibeck (another former Tiger).  I'm looking forward to catching another game this season and hopefully attending more in the future.
Posted by Scott at 12:30 PM No comments:

Please rank my review for Espresso for your Spirit.  You should be able to enter your email in the slot below.

Thanks for your help.
Posted by Scott at 5:30 AM No comments:

Espresso for your Spirit by Pam Vredevelt (Book Review)

Yesterday I finished reading a short devotional-type book called Espresso for your Spirit: Hope and Humor for Pooped Out Parents by Pam Vredevelt.  It's full of short readings (anywhere from 2 to 10 pages) and sprinkled with pertinent Bible verses, quotes,  and humorous parenting anecdotes.  I found it to be an interesting and easy read.  Vredevelt shares stories from her life and the life of friends as they deal with the various ups and downs of parenting, always with an eye toward how God uses our circumstances to help us grow.  The tone of each chapter varies, with a few leaning toward serious issues.  While each chapter was good, I think the serious tone of some stray from the Espresso pick-me-up feel of the book overall.  Included in the back of the book are study/discussion questions, which would allow this to be used in a small group or book study setting.  While Espresso for your Spirit is intended for both parents, I feel that it skews more toward mothers.  Overall, it's a good read and a good reminder that God is with us in the midst of the journey of parenting.

I was given a copy of this book as part of Waterbrook Multnomah's Blogging for Books program, in exchange for a fair and honest review.
Posted by Scott at 5:23 AM No comments:

Back to School and the start of Cheerleading

Last week, Lexi and I started the school year so we are now well under way.  Cami and Griffin start Pre-K next week.  At that point, Trisha will have a little time to herself several days a week, finally.  Also, this past weekend was the first football game of the season, so the Knights trudged out on Saturday morning to watch Lexi cheer on her team, the Giants.  Big sister received some support from Cami, making it a family affair.
Lexi has the pigtails and Cami has the pink sweatshirt on. (Sorry about the sideways view, I'm not sure why it uploaded this way)
Posted by Scott at 7:59 PM No comments:

Psych doesn't start until October this year (bummer), but this commercial puts me in the mood.  Enjoy, and I'll remind everyone when the season premiere gets closer.
Posted by Scott at 3:59 PM No comments:

Email ThisBlogThis!Share to TwitterShare to FacebookShare to Pinterest
Labels: Television

Lexi and Cami made signs and pictures to greet Trisha upon her return from the MOPS convention.  They decorated the playroom and made sure Trisha saw all of their hard work. 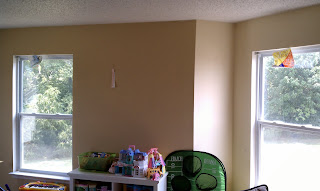 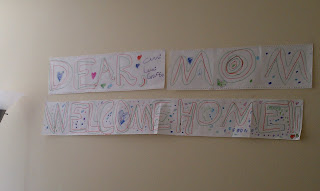 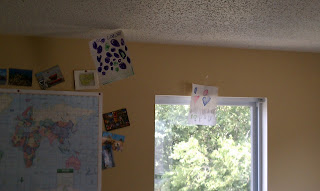 
I received a copy of Paws and Tales: Putting Others First from Tyndale House Publishers in exchange for an honest review.  I watched the two episodes of this children's show from Chuck Swindoll with my three children.  I thought it was decent.  The cast of characters includes children and adult forest creatures who live in a small town in the woods.  They interact in a variety of arenas.  It had two stories, each just over 20 minutes,  based on Bible verses and biblical principles.  The animation is okay and the stories were alright.  I wasn't blown away by it, but thought it was average.  Included with the dvd are resources that can be printed by using a computer.  There was also a song at the end of each episode.  My two youngest children liked the shows, but my oldest (7 years old) said she really didn't get it.  She understood the story, but I don't think it captured her attention.  I really think we've been spoiled by Veggie Tales.

One episode deals with two children who made a selfish choice (deciding not to help someone in need).  They then have the opportunity to correct that decision.  The main verse is Matthew 22:39.  The second episode had a spoiled rich girl who abuses the fact that many of her classmates have parents working for her father.  She uses her influence to blackmail the kids into doing things for her or she will have their parents fired.  One young boy decides to stand up to her and let the chips fall where they may.  This is structured around Philipians 2:3, and I believe it is the better of the two episodes.

Paws and Tales would be a decent addition to a family's video library or the children's department at a church.
Posted by Scott at 9:51 AM No comments:

Trisha has been out of town at the MOPS Convention in Nashville, so it's been just me and the kids for four days.  Friday night was big, though.  Lexi spent the night at a friend's house and Cami stayed with Tom and Donna, so it was just me and Griffin at home.  It was our boys' night together.  When you're four, a boys' night begins with dinner from McDonald's, where Griffin selected a Happy Meal with a Smurf in it.  That was followed up by watching a bunch of his favorite shows, including Ben 10.  It was all boy shows, without those pesky sisters wanting to watch a "girl movie".  After a "full" night of sleep, our day began bright and early (6:30) when Griffin decided it was time to watch more tv, but not in my bed; we had to go downstairs to the family room (sigh).  We then played Wii together (Ben 10, his favorite game).  Finally, I guess Griffin was getting a little tired of me because he disappeared into the playroom to play Ben 10 with his various action figures (he's very creative because he only has one actual Ben 10 guy).  It was a fun and interesting boys' night together.
Posted by Scott at 8:21 AM No comments: