Well, tomorrow we all go back to school.  It's been a fun week, filled with lots of relaxation and family time.  We took a couple of family walks along the Pensey Trail and enjoyed the outdoors.  I got the trampoline up for the spring and summer (and a sunburned head).  We did a little shopping, getting ready for the summer.  Thursday night we ate dinner with our friends, the Van Osdols, and Griffin climbed his first tree.  He was probably 25 feet up in a big pine.  Fortunately, he was able to navigate his way down without falling.  Friday, Trisha and I took the kids to the Winter Jam concert, where we met Dianna and her friend David.  It was 10 bands for 10 bucks.  I wasn't as interested in as many bands as the Rock and Worship Road Show, but there were some memorable moments.  The kids really enjoyed Group 1 Crew again, with Cami and Lexi singing along.  But the kicker was Skillet, a Christian hard (and I mean hard) rock band.  The show was big, loud, and explodey.  One of the best performances I've seen.  They played for around an hour and never let up.  My favorite moment (other than the fact that Griffin managed to sleep through nearly the whole thing) was during the song "Hero".  The drummer and her kit were on hydraulics and were moved to the end of the stage.  The rest of the band joined her, and the drums and two guitar players were lifted up into the air on platforms.  The drummer not only went up, but started going around in a circle, like a carousel, all the while singing.  It was pretty cool.  Lexi got a little scared during the song "Monster" because the stage had huge red eyes that glowed in the dark and then were revealed to be the eyes of a monster-looking prop that shot smoke out of its ears.  I thought it was awesome. Oh, and Cami wanted to know if she could have pink hair (both girls in Skillet had colored hair, one red and one blue).  She said they were her favorite part.  I think I've got a little rocker chick.

Saturday, Lexi turned 8 and she wanted to have a family birthday party.  Tom, Donna, half the Reddys (some were sick), and Dianna came over for dinner, cake, and ice cream.  Lexi had a great time, and got a lot of gifts and a lot of love. 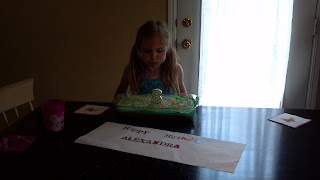 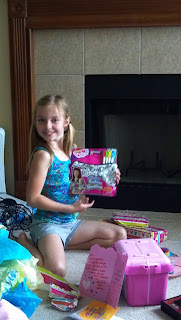 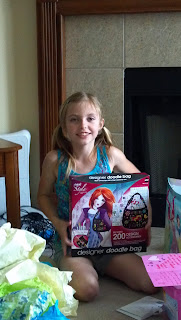 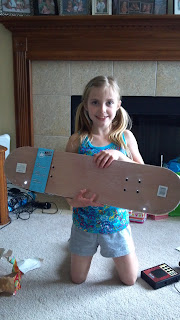 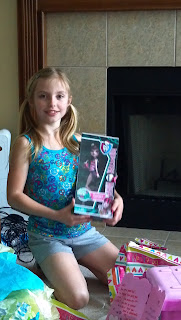 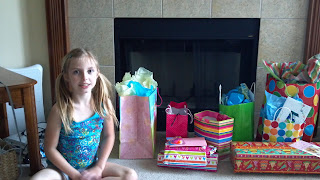