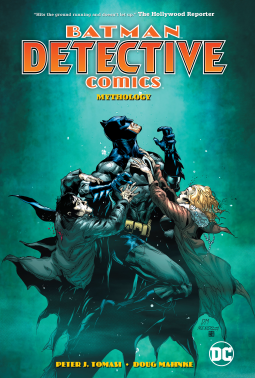 From the publisher: The Arkham Knight has arrived in Gotham City with an entire round table of deadly allies, and their first encounter will leave Batman shaken to his core!

Alfred Pennyworth...attacked at Wayne mansion! Who's hunting those closest to Batman? The monstrous shadow plaguing Gotham City gains the upper hand when two of the Dark Knight's most ardent allies fall prey to a violent vendetta!

Commissioner Gordon calls in the Dark Knight Detective when there's a murder at the Gotham City Aquarium--staged to look exactly like Thomas and Martha Wayne's crime scene, right down to the playbill and pearls. How does this bizarre homicide tie into the shadowy monster that attacks Dr. Leslie Thompkins? This creature looks to wage a war on Batman--and it's using Joker Gas to do it!

The story opens with Batman and Jim Gordon investigating the deaths of a man and woman who look exactly like Bruce Wayne's parents. Next, Leslie Thompkins is attacked by a strange creature who is looking to draw Batman out. Alfred is the next victim. Batman soon figures out that it is going after the people responsible for helping him become Batman, and the race is on to save his mentors. The creature (who doesn't have a name) acts a bit like Clayface, as it takes on various faces of Batman's villains, friends, and fellow heroes. It is relentless, attacking and reforming constantly. It also is constantly reminding Bruce of how and why he became Batman. As Batman races from one friend to the next, the mystery of the creature and its purpose in tormenting Batman are slowly revealed. As Bruce discovers who created it, Tomasi wraps things up with a twist.

Mythology was an interesting story. There wasn't clear bad guy or underlying plot that Batman was trying to stop. Rather, this was a trip down memory lane for Bruce Wayne, and Tomasi used his "mythology" to examine and almost reset Batman as issue #1000 looms. This approach is not unusual for writers, as I've read multiple stories that examine who Batman is and why he does what he does, on a level that goes beyond just revenge for his parents' murders. The way Tomasi conducts this soul-searching is a bit unique, and an interesting addition to the Batman mythology (see what I did there?).

Overall, I enjoyed Detective Comics Vol. 1: Mythology by Peter J. Tomasi. It was an exciting book, with action that never let up and a surprising twist. I would recommend it to Batman fans for sure.