The Rock and Worship Roadshow

Last night, Trisha and I took the kids to Ft. Wayne to see The Rock and Worship Roadshow.  Dianna came along to experience the kids' first concert (and jam a little herself).  The Roadshow is a cost effective ($10 a ticket) concert experience run by MercyMe, and included Jars of Clay, Hawk Nelson, Group 1 Crew (a favorite of Cami and Lexi), Rush of Fools, Trip Lee, Matt Maher, and Attaboy (we missed Trip Lee and Attaboy because they went on before the official start time).  After a 1 1/2 hr. drive, we grabbed some Taco Bell and got ready to rock.

Group 1 Crew was first (each of the first few bands played a 4-8 song set).  Lexi wanted to go home about one minute into the show (she was a little intimidated by the noise and lights) but eventually settled down, eventually dancing and not wanting to leave.  The kids and Trisha met Group 1 Crew at their merchandise table after their set.  Check out the picture and the video. 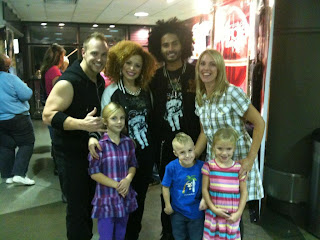 Cami loves this song.
We also enjoyed Hawk Nelson, who were very energetic.  They have a punk/pop sound and finished their set with a cover of "Don't Stop Believin'" by Journey.  They all wore long, mullet hair band wigs.  The kids thought it was hilarious.
I was anxious to see Jars of Clay, one of my all time favorites.  They opened with a song called "Work".  I bought this CD when the twins were born, and Trisha and I listened to this song in particular many times when we were driving to visit Griffin in the NICU.
They also played "Little Drummer Boy".  I love their version of this song.  The last verse always chokes me up. "I played my best for him. Then he smiled at me...me and my drum."

MercyMe finished up. I really enjoyed their songs (I didn't have any familiarity with most of them). We left during their set because the twins had fallen asleep and we had a long drive home (thankfully we could set our clocks back and recover an hour of sleep).  Everybody was happy with the show, and excited to see more concerts.  I highly recommend all of these bands and this show.
Posted by Scott at 1:19 PM