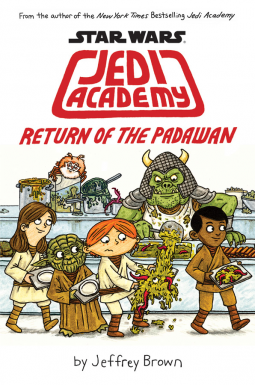 After surviving his first year at Jedi Academy, Roan Novachez thought his second year would be a breeze. He couldn't have been more wrong. Roan feels like he's drifting apart from his friends, and it's only made worse when Roan discovers he's not the amazing pilot he thought he'd be. When the school bullies take him under their wing, he decides they aren't so bad after all--or are they?

This year, Roan will have to face alien poetry tests, menacing robots, food fights, flight simulation class, online bullies, more lightsaber duels, and worst of all . . . a girl who is mad at him.

This incredible, original story captures all of the humor, awkwardness, fun, and frustrations of middle school--all told through one boy's comics, journal entries, letters, sketches, e-mails, and more.

Jeffrey Brown's newest Jedi Academy book, Return of the Padawan, picks up where the previous one left off.  Roan Novachez is about to begin his second year at the academy and is excited about seeing his friends and training to be a starfighter pilot.  But things don't go exactly as planned, as Roan runs into girl trouble, friend trouble, bully trouble, and teacher trouble.

Roan continues to learn about the Force, trains as a pilot, goes on field trips to other planets, and keeps drawing his comic strip, Ewok Pilot.  Along the way, he learns what happens when you begin to venture down the path of the Dark Side and what it means to truly be a friend.

Brown perfectly captures the essence of his characters, both with words and with pictures.
With all the laughs, smiles, and awkwardness of the first book, Return of the Padawan shows the trials and tribulations of a middle school boy, although one who has the power of the Force.  This book is a must read for young boys, or anyone who loves Star Wars and remembers what middle school was like.

I received a preview copy of this book from Scholastic in exchange for an honest review.
Posted by Scott at 6:36 AM