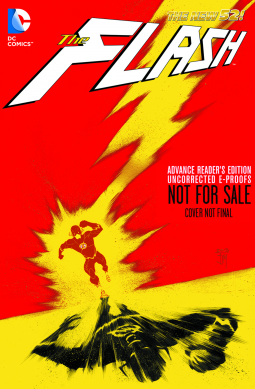 From the publisher: The fourth volume of Brian Buccellato and Francis Manapul's New 52 breakout hit - The Flash!
A mysterious and powerful Speed-Force killer has left a trail of bodies in his wake and only Barry has the power to stop him. But when the killer stays one step ahead of him, Barry finds himself face to face with the Teen Titans and Kid Flash for the first time. All this will lead to a confrontation with the Flash's most deadly foe, The Reverse Flash!Collects THE FLASH #20-25, and #23.3: REVERSE FLASH.

I've enjoyed the New 52 take on the Flash, and Vol. 4: Reverse is no exception.  It's a fun and enjoyable story.  Barry Allen, aka the Flash, is moving on from his trip into the Speed Force to rescue Iris West and several others, all who were gifted with some sort of power from their time there.  His girlfriend, Patty Spivot, has moved in and things seem to be getting back to normal.  Then Barry discovers the new heroes are being killed by someone stealing the Speed Force and sporting a symbol that is the reverse of the Flash's.  Yes, that's right, it's the first appearance of Reverse-Flash in the New 52. Throw in an appearance by Kid Flash and it's a return to the Flash Family-type story of old.

Buccellato and Manapul do a nice job telling this story.  There are several nice reveals, and they add in the first meeting between Flash and Kid Flash.  The romance between Patty Spivot and Barry Allen is interesting, as long-time readers remember the marriage between Barry and Iris West, who is also a major character in this story.  The writers also do a good job of allowing Barry Allen's positivity show through.  Flash has always been an upbeat hero, a sort of counter-point to the brooding and darkness of Batman, and this characteristic is constantly on display in Reverse.

The New 52 affected many characters a lot, and Barry Allen/Flash is one of those.  I really liked the idea of the Flash Family, including Barry and Iris.  I also enjoyed the Reverse-Flash/Professor Zoom character; however, that is not the version of Reverse-Flash in this story.  If I had a gripe about this book, it is this: The New 52 removed much of the deep history surrounding the Flash, not necessarily for the better in my opinion.  This is not the fault of the writers, who have been doing a fine job with the editorial decision.

Reverse is a fun and entertaining story.  It's worth reading for fans of the Flash.

I received a preview copy of this book from Netgalley and DC Comics in exchange for an honest review.
Posted by Scott at 6:45 AM