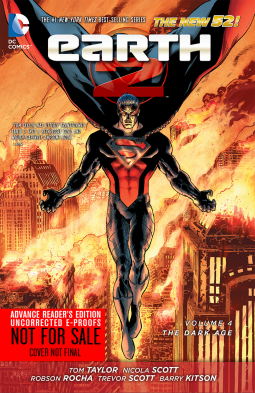 From the publisher: Once thought dead, Superman now returns to Earth to do the destructive bidding of Darkseid!

The Wonders of Earth 2 have struggled to keep the forces of Brutal and Darkseid at bay. But now with the return of Superman, they can no longer stand up to the wake of destruction he brings. But now, with the emergence of a new and mysterious Batman, comes the hope that he may know how to defeat the rogue Man of Steel before Earth 2 is destroyed completely.

Tom Taylor's Earth 2 is a fun and action-packed book.  The Dark Age collection is no different.  As the Earth is dealing with multiple fire pits (purpose unknown), a hostile takeover in a Middle Eastern country, massive destruction all over the world (especially Gotham), and the death or absence of all the major superheroes, a surprise is revealed: Superman is not dead, and has returned.  Unfortunately, Superman is now serving the ruthless Darkseid.  As the remaining heroes look for a way to defeat him, Batman returns with a vengeance, but its not the Batman we all remember.

The Dark Age deals with the war with Superman ably.  It is almost like an action movie in comic book form.  Over the course of the four parts of the story, the heroes are forced into new alliances and have to deal with disaster on a grand scale.  In my opinion, the best parts of the story are focused on the return of Lois Lane (in an unexpected form) and the new Batman, who is infinitely more vicious than Bruce Wayne.  There really isn't any closure at the end of this book, but the storyline functions as a transition into the next big event to hit Earth 2.

My favorite part of this collection is Earth 2 Annual #2, which details the origin of the new Batman.  The story is terrific and puts a whole new spin on the Batman mythos.  The reveal of who the new Batman is leaves some interesting stories to be told in the future.

One of the great things about Earth 2 is that the writers (in this case, Tom Taylor) are able to take familiar characters and put them through trials that would never be accepted in the regular books. This means changing the secret identity of characters and sometimes even having them die.  This adds a newness and unpredictability to the stories.

I really enjoy Earth 2, and liked The Dark Age.  Its a fun, loud, and interesting book.  I recommend it highly.

I received a preview copy of this book from DC Comics and Netgalley in exchange for an honest review.
Posted by Scott at 8:33 AM