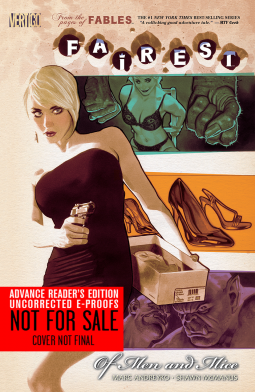 From the publisher: Cinderella returns in an all-new epic! After an assassination attempt on Snow White, Cind is called back into service to unravel an age-old conspiracy that dates back to that fateful midnight ball! Can Cind uncover the plot and prevent a massacre in Fabletown? By critically acclaimed writer Marc Andreyko (MANHUNTER, Torso, The Lost) and legendary artist Shawn McManus (CINDERELLA, SWAMP THING), FAIREST VOL. 4: CINDERELLA - OF MEN AND MICE ties directly into FABLES!


The latest Fairest collection, Of Mice and Men by Marc Andreyko, was only average as far as the Fables stories go.  It had a lot of potential and plays a role in the overall storyline running through Fables, but it was a little disappointing to me.

To summarize, Fables associated with Cinderella are being killed, so she is called back into service to track down the culprit in a mystery that goes all the way back to her origins at the fateful  ball.  As she encounters characters from her past, Cinderella also finds herself on the run from an assassin.  Meanwhile, hints at a bigger overall conspiracy that will affect all the Fables of Fabletown are sown throughout.  As Fables and Fairest near the end of their run, plot points and characters begin to converge.

I really enjoyed the concept in Of Mice and Men.  Having Cinderella, Fabletown’s resident super-spy, return to her roots provides for a fun and entertaining story.  The fairy godmother and the mice (who were transformed into men) are great supporting characters.  This look back at the legend of Cinderella adds depth to a somewhat superficial story. Additionally, there are some fun twists on the consequences of using magic.

I suppose my problem is with the "adult content" and portrayal of Cinderella and several other characters.  While Cinderella is no saint (she is a James Bond-type, after all), her promiscuity and the portrayal of it is almost over done, as is that of Marcel Champagne.  Fairest is an adult comic, but this collection seemed to have sex and language in abundance simply for the sake of having it.  It was a distraction from the storyline, rather a complement.

Overall, I liked Of Mice and Men, but I look forward to the return of a little less of the adult situations in the final collection.

I received a preview copy of this book from DC Comics and Netgalley in exchange for an honest review.
Posted by Scott at 10:32 PM