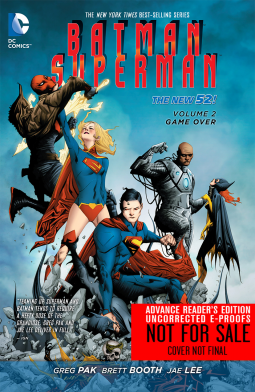 From the publisher: The Dark Knight and the Man of Steel uncover a plot by the Toymaster to use a secret, potentially deadly element in his new video game, the characters created by players manifest in real life. The ultimate fighting game results--and a world-wide network of players must team up to create the most powerful, skilled Super Heroes imaginable with one goal: To kill Batman.

When Batman and Superman are corned by the Toymaster and Mongul, they are pitted against on another in a battle to the death, with their only hope being the The Worlds' Finest.

Batman/Superman Vol. 2: Game Over is the latest collection of the two heroes' team-ups.  Principal writing for the majority of the stories in the collection is by Greg Pak, and the gorgeous artwork is done by Jae Lee, with a couple of other artists on the other issues.

There are three stories in Game Over.  The first deals with Toymaster's attempt at a virtual reality game where the players attempt to kill Batman.  When Mongul reveals himself, things quickly spin out of control.  The second story deals with the fallout of the battle with Mongul, as his son, Jochi, challenges Batman, Superman, and several of their associates to battle for the control of WarWorld.  This arc guest stars Supergirl, Steel, Red Hood, Batgirl, and Krypto.  The final story is a crossover with World's Finest, and brings Huntress and Power Girl in to contact with Batman and Superman.  This is an interesting moment, as both heroines are the daughters of these two heroes in an alternate universe.  As Power Girl's powers go out of control, it seems the only solution is opening a doorway back to Earth 2, the alternate universe that is home to Huntress and Power Girl.  This arc ties in loosely to the events going on in the Earth 2 comic.

Overall, Game Over was an entertaining book.  It's always intriguing to see the contrast between Batman and Superman played out in such close quarters.  Additionally, the appearance of fellow heroes and heroines makes for the opportunity to tell interesting and new stories.

I would recommend Batman/Superman Vol. 2: Game Over to fans of either or both of these heroes.  It is a worthy follow-up to the first volume.

I received a preview copy of this book from DC and Netgalley in exchange for an honest review.
Posted by Scott at 6:38 AM