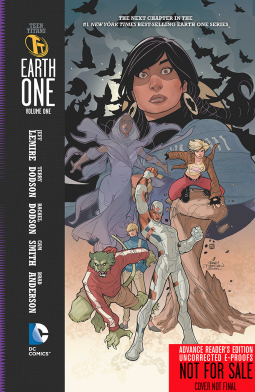 From the publisher: A new original graphic novel in DC's popular "Earth One" series, TEEN TITANS: EARTH ONE follows in the tradition of SUPERMAN: EARTH ONE and BATMAN: EARTH ONE, both of which were #1 New York Times bestsellers.


The Teen Titans never felt like normal kids... but they had no idea how right they were. Their seemingly idyllic Oregon upbringing hides a secret -- one that will bring killers, shamans, and extraterrestrials down on their heads, and force them into an alliance that could shake the planet to its foundations!

Jeff Lemire’s Teen Titans: Earth One is the latest book in the Earth One series of original graphic novels from DC.  The great idea behind this series is to reimagine the DC heroes in a modern world and to leave behind all previous continuity and baggage.  Also, because this is separate from the main line of comics, the writers are allowed to change the characters, their origins, and even create circumstances that are lasting, such as the death of a character.

With that said, Lemire does a nice job reimagining the Teen Titans.  Rather than a group of sidekicks who form their own team (as is traditional), these kids all come from the same community.  Their “parents” are part of Starlabs, and the kids are the result of an experiment that was conducted on them.  When a mysterious ship crashed on Earth, a group of scientists, headed by a an as-yet-unnamed man, collected the only survivor, an infant named Starfire.  Fast forward 16 years, and Victor, Tara, Garfield, and Joey all begin displaying weird signs of having powers.  As they attempt to get to the bottom of the mystery, they come in to contact with Deathstroke, Raven, and Starfire.

This is nice opening to the story of the Teen Titans.  Familiar heroes (Cyborg, Terra, Beast Boy, and Jericho) are all introduced and a sparse origin is told.  This volume sets the stage for future stories as the group of teen heroes comes together and begins to discover the mystery of their pasts and how they acquired their abilities.

Teen Titans: Earth One is an entertaining book and does its job well: introduce the readers to the characters and set the stage for future adventures. I recommend this book to readers who enjoy a new take on familiar characters.