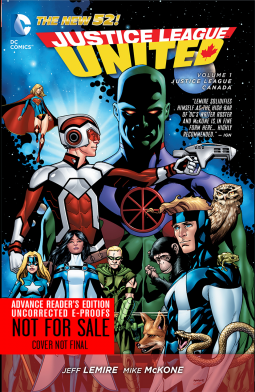 In the aftermath of FOREVER EVIL, Adam Strange is caught up in an adventure across the far reaches of the cosmos that will unite an unexpected team of heroes including Supergirl, Hawkman, Green Arrow, Stargirl, Martian Manhunter and Animal Man - but if they're on the team, who exactly is Canadian? Plus: Don't miss the debut of a new Canadian hero who will have a huge effect on the group!

Animal Man and Stargirl were approached by anthropologist Adam Strange when his girlfriend, Alanna, disappeared in a beam of light.  Upon investigating the incident, they were joined by Martian Manhunter and Green Arrow.  As they encounter aliens, they find them transported to the planet Rann, where they discover that the shape-shifting alien Byth, along with the bounty hunter Lobo, have an evil plan in motion.  As Supergirl and Hawkman join them, the group engages in a fight to save the universe from the mega-powerful child Ultra.  Meanwhile, Midayo and Alanna (who was transported back to Earth), come face to face with the Witago, a beast from Cree legend.

Yes, it sounds crazy.  Yes, it is a little bit crazy.  The tone Lemire set for this book is very similar (at least in my recollection) to that of the Justice League International stories of Keith Giffin.  This book seems like it is going to be a little more offbeat and unusual than the typical Justice League-type stories, and that's a good thing.  Sometimes its good to be different than the pack.  My favorite part of the book is the interaction between Animal Man and Green Arrow, who seem to be filling the Blue Beetle and Booster Gold roles from the JLI.  They are constantly cracking on each other, and bring a light-hearted element to the story that offsets the seriousness of Martian Manhunter, Supergirl, and Hawkman.

I don't know what the future holds for Justice League United.  I can see this book finding its niche and developing its own loyal following.  And while I thought it was a good story, I'm not sure it's the right match for me.  That being said, I would recommend Justice League United to fans looking for a different kind of team book and/or fans of Jeff Lemire.

I received a preview copy of this book from DC Comics and Netgalley in exchange for an honest review.
Posted by Scott at 10:37 PM