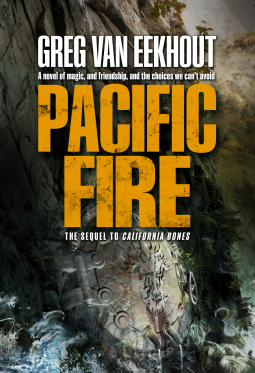 From the publisher: I’m Sam. I’m just this guy.

Okay, yeah, I’m a golem created from the substance of his own magic by the late Hierarch of Southern California. With a lot of work, I might be able to wield magic myself. I kind of doubt it, though. Not like Daniel Blackland can.

Daniel’s the reason the Hierarch’s gone and I’m still alive. He’s also the reason I’ve lived my entire life on the run. Ten years of never, ever going back to Los Angeles. Daniel’s determined to protect me. To teach me.

But it gets old. I’ve got nobody but Daniel. I’ll never do anything normal. Like attend school. Or date a girl.

Now it’s worse. Because things are happening back in LA. Very bad people are building a Pacific firedrake, a kind of ultimate weapon of mass magical destruction.  Daniel seemed to think only he could stop them. Now Daniel’s been hurt. I managed to get us to the place run by the Emmas. (Many of them. All named Emma. It’s a long story.) They seem to be healing him, but he isn’t going anyplace soon.

Do I even have a reason for existing, if it isn’t to prevent this firedrake from happening? I’m good at escaping from things. Now I’ve escaped from Daniel and the Emmas, and I’m on my way to LA.

This may be the worst idea I ever had.

Pacific Fire, Greg van Eekhout's sequel to the terrific California Bones is just as good and just as engaging as the first book.  Pacific Fire is a sequel, but it isn't necessary to have read California Bones in order to understand and enjoy it.  It is the second book in a projected trilogy, but contains its own complete story.

Pacific Fire picks up the story of Daniel Blackland ten years after the events in California Bones. Blackland is an osteomancer, a wizard of sorts who gains his power by ingesting the remains of other magical creatures/beings (it's gross, but a creative magic system).  The reader picks up the story with Daniel and Sam (the teenage golem of the Heirarch - former ruler of the Southern California kingdom) continuing to stay on the move, one step ahead of the many powerful people who would love to get their hands on Sam in order to gain his power.

While in once such hiding place, Daniel is contacted by Gabriel Argent, a powerful water mage. He informs Daniel that a group of wizards led by Otis Roth (who Daniel has a history with) is planning to recreate a Pacific Firedrake (dragon) to use as a weapon of mass destruction.   Argent tasks Daniel with destroying the creature, and what follows is another wonderful heist-type story, with an ending that I should have seen coming but didn't, due to van Eekhout's skill as a writer.

One of the pleasures of van Eekhout's books are the characters. Daniel is a fully realized character, and Pacific Fire deepens him, adding even more layers. During the journey to destroy the firedrake, Sam is also turned into a very well-written character.  Furthermore, the supporting cast is wonderful and unique: Moth, Em (of a group of golems all named Emma), Argent, Roth, and several others.

The landscape of Southern California is familiar enough to picture, but different enough to be vivid and new.  The reader is given a glimpse of a wider world in this book.  The idea of ingesting bones, etc. to obtain magic is also very creative and interesting.  It is unlike any other magic system I've read.

This is a really cool book, a worthy successor to the first book. Greg van Eekhout has created characters and a world that will keep me coming back for more.  During one particular scene, Sam says, "You just showed me that when people do stupid things for the right reasons, sometimes they can live with themselves. Well, millions of people need me to do a stupid thing, and I need to do it, too." This perfectly captures the tone and heroism of Pacific Fire, a book I highly recommend.

I received a preview copy of this book from Tor Books in exchange for an honest review.
Posted by Scott at 6:36 AM