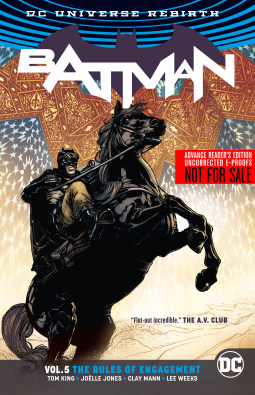 From the publisher: Author Tom King pens the fifth volume of his critically acclaimed, best-selling Batman series in BATMAN VOL. 5!

Following Catwoman's answer to his marriage proposal, Batman leaves Gotham City on a quest of renewal and redemption in the desert. As he travels and fights, he encounters members of his family--each disturbed by Batman's journey, each ready to stand in his way and push back against his stubborn determination to evolve into something better than a superhero.

Has the Caped Crusader passed the point of no return? He's going to need a little help from his friends, but this help comes with a downside: Batman's true intentions will be exposed.

Tom King's run on Batman has been terrific, and his latest, Batman Vol. 5: Rules of Engagement, is no exception. Over the past year, King had Bruce Wayne/Batman deciding to be "happy" which led him to propose to Selina Kyle/Catwoman. Then Bruce felt like he needed to confess his biggest secret to Selina (the story in Batman Vol. 4: The War of Jokes and Riddles). This volume picks up with Bruce and Selina journeying to a no-man's land country to visit Talia al Ghul (Batman's ex). This purpose for this journey is to see Holly Robinson, a former friend of Selina's, whom Selina took the blame for 237 murders for. Selina would like to be cleared of this so she is no longer a wanted murderer. King also takes some time to focus on how Bruce's proposal is looked at by Alfred and the various current and former Robins.

King tells two additional stories, as well. This first is a fun dialogue between Selina and Bruce, and also between Clark Kent/Superman and his wife, Lois Lane; the conversation concerns Bruce's engagement. This leads to an entertaining double-date. The final story hits on how Bruce and Selina met and their initial flirting, with a heartfelt postscript touching on their future.

Tom King has quickly become one of my favorite Batman writers. There is just something about how he writes that imbues the characters with heart and soul. He seems to have an excellent grasp on Batman's humanity, and how relationships with others, even for a loner like Bruce, make us whole. He has also taken a huge step with his story of Bruce and Selina being engaged. His Catwoman is a compliment to Bruce, and not at all a lesser figure. There is a balance between the two that seems to make each better than they are on their own. I'm really looking forward to following this story to see how it develops. King also does a great job with the supporting characters. In this particular volume that included the Robins, Superman, and Lois. All were well-rounded and three-dimensional characters.

This was an awesome book, and I highly recommend Batman Vol. 5: Rules of Engagement by Tom King. While it is part of a continuing story, it can also be read on its own. It is a must for Batman fans, and I'd suggest it to readers looking for a sample of King's writing, as well.

I received a preview copy of this book from DC Comics in exchange for an honest review.
Posted by Scott at 6:45 AM