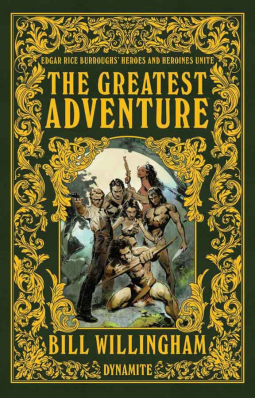 From the publisher: In ancient days, Jason gathered the greatest heroes of his age and set out on the ultimate sea voyage. Now, in Tarzan's era, Jason Gridley does the same. The greatest heroes of the Edgar Rice Burroughs universe come together as the crew of the good ship Venture, with none other than Tarzan as their captain. It's a race this time, against a battleship of dark hearted villains, and the fate of many worlds hangs in the balance.

I'm a fan of Bill Willingham's work on Fables, so I jumped at the chance to read The Greatest Adventure. The plot summary sounded interesting, sort of a League of Extraordinary Gentlemen but with Edgar Rice Burroughs's characters, of which there are a lot more than I was familiar with. However, I found The Greatest Adventure just okay.

First of all, there were a ton of characters. In addition to Tarzan, Jane, and John Carter, there were about 20 other characters, none of which I was really familiar. There may have been some nods and winks from Willingham to his readers that I didn't pick up on, but this lack of familiarity prevented me from getting very engaged with the story. And honestly, it seemed like Willingham didn't really know what to do with all of the characters either, as several encountered challenges along the way that left them by the wayside with not much said about them the rest of the story. At no point was I overly concerned about any of the characters.

Second, the plot was kind of basic: Bad guy works with aliens to create a weapon to conquer people/planets/etc. The villains weren't very well rounded, more stock characters. The group of heroes encountered many challenges to their mission, including a journey to the center of the earth, a land that time forgot, and a visit to Mars. As far as I'm concerned, the action on Mars was the best part of the story, but that might just be because I'm more familiar with the John Carter stories. Speaking of being familiar, there was very little jungle adventure, which seems strange when Tarzan is a main character. I didn't find myself engaging with much of the plot, and had to push myself through a large chunk of the story.

I really appreciate how Willingham told a deep and far-reaching story with a boatload of familiar characters in his Fables series. Unfortunately, The Greatest Adventure just didn't work for me. I'm going to chalk it up to not really knowing many of the characters. It's possible that Willingham was trying to write in the style of the early 20th century pulp writers as well, and if that's the case, I get it, I just didn't care for it.

If Willingham tries something in this vein again, I'd certainly give it a shot. However, I can't really give a high recommendation for The Greatest Adventure. If you're a Burroughs fan, you should give this a shot. Willingham fans might want to check it out as well, but it wasn't really my favorite.

I received a preview copy of this book from Dynamite Entertainment in exchange for an honest review.
Posted by Scott at 12:55 PM