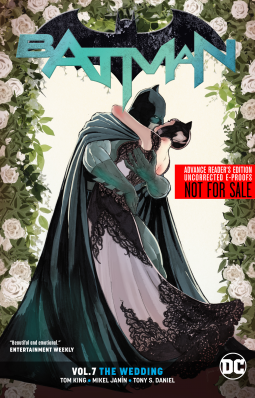 From the publisher: It's the marriage of Batman and Catwoman! The wedding of the century is here in BATMAN VOL. 7, written by the critically acclaimed Tom King!

I really enjoy Tom King's Batman, and have been fascinated by the storylines leading up to the wedding of Batman and Catwoman. It has been a terrific character study of what Batman/Bruce Wayne would be, and is, like when he is happy. This latest collection, Batman Vol. 7: The Wedding, is the culmination of a story that began 50 issues ago.

The first of two story arcs in this collection focuses on Booster Gold, a time-traveling superhero from the future who is often looked at as comic relief. With Batman getting married, Booster is thrilled to get him the perfect wedding gift - Booster saves Bruce Wayne's parents from being murdered. Unfortunately, Booster has a butterfly effect moment, and the present is no longer one he recognizes. Oh, all the major players are present, but they are very different from the regular timeline. This three part story looks at one consequence of Batman being happy, and it is definitely a bittersweet story. I also wonder if this storyline is connected to Booster Gold's role in the Heroes in Crisis series going on currently in the DC Universe.

The other story arc is a Joker story, because who is Batman without the Joker? The arc starts with a lot of action, but quickly turns into a very deep conversation between Catwoman/Selina Kyle and the Joker. Both characters are very philosophical about their past and engage in a fun give and take; however, the circumstances of this conversation are anything but normal. In the end, once again King brings the narrative back around to Batman's happiness.

The final chapter of this book isn't an arc; rather, its the wedding day itself. King employs a narrative that unique in comics, at least in my opinion; he tells the story through intercutting a letter from Bruce to Selina with a letter from Selina to Bruce. As the couple approaches the wedding, they talk to their own confidantes, but the driving forces are the letters. And the story builds to an unexpected, but not surprising, ending that again taps into the theme of Batman's happiness. I want to mention the artwork in this particular chapter as well. The main story art is interspersed with one page pin-ups of classic scenes or designs of Batman and Catwoman drawn by a who's who of artists. These pages contain the texts of the letters, and this contrast with the regular art is a nice piece of storytelling from King and the artists.

I love Tom King's Batman stories. They are getting better and better each time out. And Batman Vol. 7: The Wedding is no exception. What might have been a cheesy event story took on a depth that I wouldn't have imagined when the wedding idea was announced. At this point, I would highly recommend any Batman stories by Tom King, and would give The Wedding my highest recommendation. I can't wait to see where the story goes from here.