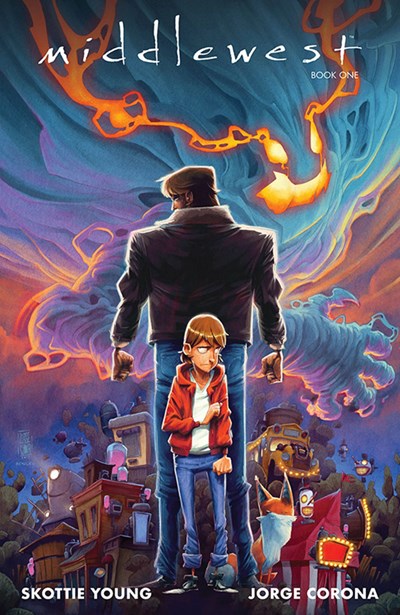 From the publisher: The lands between the coasts are vast, slow to change, and full of hidden magics. The town of Farmington has been destroyed sending an unwitting adventurer and his vulpine companion in search of answers to quell a coming storm that speaks his name. From author SKOTTIE YOUNG (I HATE FAIRYLAND, DEADPOOL) and artist JORGE CORONA (NO. 1 WITH A BULLET, FEATHERS, BIG TROUBLE IN LITTLE CHINA: OLD MAN JACK) comes the tale of Abel, a young boy who must navigate an old land in order to reconcile his family's history.

Middlewest Vol. 1 by Skottie Young is a really good comic. It's the story of Abel, a 12-14 year old boy, who ends up on the run across the country, while accompanied by a talking fox. Along the way, he meets several interesting characters, including a hobo/wizard (?), an orphan/carnie and her robot friend, and a mind-reader/mystic. All the while, he is just trying to escape his abusive father and control a mysterious power that is growing within him.

First, the characters of Middlewest are terrific. Abel is a well-drawn protagonist, with all of the angst, insecurity, and bravado of a young teenager. He is at times supremely confident and at others, very unsure of himself. His power manifests when he gets angry or upset, and it frightens him. His quest of self-discovery is the backbone of this book, and there appears to be a lot of room for growth. Abel's father is depicted as an angry, abusive man who's wife left him. Some backstory shows that there is more to him than that, but it's his own display of power that sends Abel off on his own. Fox is the talking fox that seems to be Abel's only friend and companion on his journey; he also functions a bit as Abel's conscience (there's a funny Jiminy Cricket joke in the first couple of issues).

While reading Middlewest, I was reminded of several other graphic novels: The Amulet series, Bone, and I Kill Giants. The publisher suggested Return to Oz as a similar book. While none are exact, all of these books feature a young(ish) protagonist(s) in a strange land that is just familiar enough, but not quite like our world. They are pitted against unusual and often frightening circumstances. Several of these books also have the protagonist dealing with issues relating to their parents or family, or a great tragedy. Middlewest has all of this to some extent. And the depth Skottie Young has developed in just the first story arc is great.

I really enjoyed reading Middlewest Vol. 1. Skottie Young has the makings of a classic on his hands, and I can see this book ending up in middle school/high school libraries. Pick up a copy and get in on the ground floor.

I received a preview copy of this book from Image Comics in exchange for an honest review.
Posted by Scott at 6:49 AM