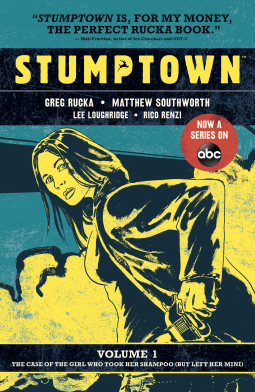 From the publisher: Soon to be a TV show on ABC this fall starring Cobie Smulders!

Join the investigation on Dex Parios's first case for just $10! Dex is the proprietor of Stumptown Investigations, and a fairly talented P.I. Unfortunately, she's less adept at throwing dice than solving cases. Her recent streak has left her beyond broke―she's into the Confederated Tribes of the Wind Coast for 18 large. But maybe Dex's luck is about to change. Sue-Lynne, head of the Wind Coast's casino operation, will clear Dex' debt if she can locate Sue-Lynne's missing granddaughter. Is this job Dex's way out of the hole or a shove down one much much deeper?

My introduction to Stumptown by Greg Rucka was through the commercials for the tv show based on the comic. It looked interesting, so I watched the first episode. I enjoyed the story, the characters, and the dialogue. When I discovered it was based on a comic, I decided to give it a read.

Upon reading Stumptown, I noticed some differences between the comic and the show, but the essence of the story was the same. Dex Parrios, a PI in Portland, is hired to find the granddaughter of the woman in charge of the Native American casino, to whom Dex owes around $17,000. As she begins her investigation, Dex discovers a lot more than she bargained for, as she crosses paths with two thugs who try to kill her, and the family of a man who may be the head of MS-13 in the Pacific Northwest.

While the missing person mystery was engaing, two things stood out in Stumptown: the characters and the city. Portland is a beautiful city, and to have it be the setting for Dex's various investigations is pretty cool. I enjoy a unique setting, and it seems like we'll be getting a bit of a tour of Portland through Dex's investigations. The characters are fantastic, and while it's Dex who gets the majority of the attention, Ansel (her brother with Down's Syndrome), Grey McConnell (a friend), and Tracey Hoffman (a police officer and friend), and Sue-Lynne (the head of the casino for the Confederated Tribes of the Wind Coast) add a lot of depth to the series. In fact, in its own way, Stumptown reminds me of two of my favorite detective shows, Longmire and Justified. Both series took place in non-traditional settings (Wyoming and Kentucky) and both had outstanding supporting characters who felt just as real as the lead character.

Having finished Stumptown Vol. 1, I'm looking forward to reading the other three volumes, and hope that Rucka returns to the series soon. I'll also continue to watch the tv adaptation to experience the further adventures of Dex Parrios. I highly recommend this book to fans of detective/mystery stories, particularly if you like your heroes a little disheveled and rough around the edges, and your setting to stray from the traditional big city cookie-cutter. One last thing, this book is a reissue of a volume published several years ago.

I received a review copy of this book from Oni Press and Netgalley in exchange for an honest review.
Posted by Scott at 5:12 PM