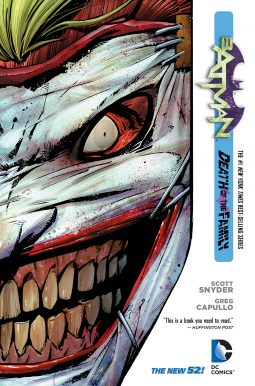 From the publisher: After having his face sliced off one year ago, the Joker makes his horrifying return to Gotham City! But even for man who's committed a lifetime of murder, he's more dangerous than ever before. How can Batman protect his city and those he's closest to? It all leads back to Arkham Asylum...

This new hardcover collects the the critically acclaimed tale DEATH OF THE FAMILY from the superstar #1 New York Times best-selling team of writer Scott Snyder and artist Greg Capullo. BATMAN VOLUME 3 will have reprecussions that will affect the Batman universe for years to come!


Scott Snyder’s Batman: Death of the Family is incredible.  It is the culmination of a storyline that was hinted at early in the New 52 reboot of DC Comics.  The Joker has returned, has attempted to reattach his face, and is after the Batman family of heroes.  The Joker wants to strengthen Batman by eliminating his “hangers-on”, all those who cause Batman to fail to reach his potential (at least according to Joker).  This is a fantastic story, the full range of which crosses into all the subsidiary Batman family of titles.  The extras don’t have to be read to enjoy the plot, but they do add depth and differing perspectives.
Synder has done an amazing job bringing out what makes Joker truly terrifying: his insanity and love of chaos.  Not since The Killing Joke has Joker been this sadistic, cruel, and scary.  Joker’s motivation is truly frightening, and there is a strong suspicion that he knows who the Bat-heroes are under the masks.  To add to the creepiness is the font used to show Joker’s dialogue and the fact that he is wearing a mechanic’s shirt that says “Joe” on it the entire time; something about the ordinariness of that strikes me as making him even creepier (artist Greg Capullo really added to the atmosphere of the story).
I highly recommend this book.  This is one of the best Batman stories in recent memory, rivaling the best that Grant Morrison has done.
I received a preview copy of this book from DC Comics in exchange for an honest  review.
Posted by Scott at 8:42 AM