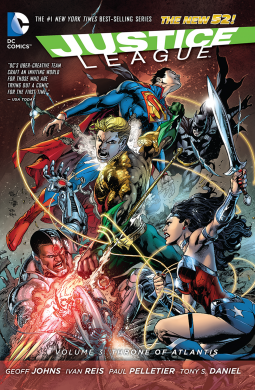 From the publisher: When Atlantis is struck by a U.S. Naval missile gone awry, Atlantis--led by Aquaman's brother Ocean Master--attacks the East Coast of the United States flooding its major cities such as Boston, Metropolis, Gotham City and several others.

The Justice League comes together to help Aquaman turn back the tide, but they soon learn that they are woefully overmatched by the Atlantean Army, and must find a way to save the world from total annihilation.

Throne of Atlantis continues Geoff Johns's wonderful run on Justice League.  In this crossover with Aquaman, the surface world, particularly Boston, Gotham, and Metropolis, are attacked by Aquaman's brother, Ocean Master, the King of Atlantis.  The character interactions continue to develop as the League struggles to not only defeat Ocean Master and protect the U.S., but to discover who is behind the attack.  Batman and Aquaman struggle for leadership of the group, which creates a new dynamic, as Batman is not used to people questioning him.  Superman and Wonder Woman continue to explore their relationship, trying to decide just what they want it to be.  Cyborg and Flash continue to grow into their roles.

The artwork by Ivan Reis is fantastic and complements the outsized events that seem to follow our heroes.

I highly recommend this book.  It is a good example of why DC resetting its characters with the New 52 was a good idea.

I received a preview copy of this book from DC Comics in exchange for an honest review.
Posted by Scott at 6:44 AM