The Deaths of Tao by Wesley Chu - Book Review 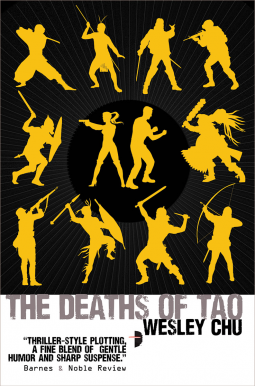 From the publisher: The Prophus and the Genjix have now both found a way off-planet. The Genjix method will take less time – about 30 years’ less time – but will mean the ultimate destruction of mankind in the process.


They think it a small price to pay to get home.
It's up to Roen and Tao to save the world. Oh, dear...
The Deaths of Tao is the sequel to Wesley Chu’s The Lives of Tao (see my review here).  It is every bit as entertaining as the first, although in an entirely different way.  The buddy cop interplay between Roen Tan and Tao, the Quasing that lives inside him, is still there.  The humor and secret history of the world run throughout this book, as well.  Zoras, Tao, or Baji open each chapter with a little more history of the Quasing.
One difference, though, comes in the fact that The Deaths of Tao is a second book, and not an origin tale like the first one.  This allows Chu to expand the scope of the story.  Roen’s training and introduction to the world of the Quasing, including the war between Prophus and Gengix (the two Quasing factions), take up the majority of the first book.  Now the reader sees the larger story taking place and is exposed to a more in-depth look at the Gengix’s plans and the Prophus’ attempts to thwart them.
There are also three characters providing the perspective.  In addition to Roen and Tao, Jill (Roen’s wife) and Baji take a lead role.  This is a nice change, because Roen’s view tends to be skewed.  The Gengix view is shown through the eyes of Enzo and Zoras, who played a part in the first book.  Using three point-of-view characters lets Chu take the action around the globe.  It also allows him to show simultaneous events playing out as the war between the Quasing reaches critical level.
Another change in this book is that Chu was able to show how the relationship between Quasing and human host was different for each pairing.  The personality of the human played a part in this, but so did the personality of the Quasing.  A secondary character demonstrated what would happen if the wishes of the Quasing did not line up with the human.
Finally, the tone of this book is much more serious, or darker, than its predecessor.  The serious moments in the first book were often offset by the humorous exchanges between Roen and Tan.  In The Deaths of Tao, we see how three years of undercover and marital strife take their toll on Roen.  Roen is less of the off-the-cuff smart-aleck and understands the consequences of his actions.  His dedication to Tao begins to affect his standing in the Prophus command structure.  This is a nice, and realistic, development for the character.
The main storyline in this book is sufficiently resolved, but Chu drops a game-changer at the end, and then follows that up with an added scene on the last page that reminds me of some of the post-credit scenes Marvel has been putting into its movies.  If he decides to write another sequel, he is set up to take the story on in a new direction.
I enjoyed The Deaths of Tao, and would recommend it to readers who enjoy espionage tinged with sci-fi.  Chu’s writing style is very easy to read, and the action flows steadily on.  I look forward to seeing what he does in the future.
I received a preview copy of this book from Angry Robot Books in exchange for an honest review.
Posted by Scott at 8:51 AM