A Dance of Mirrors by David Dalglish - Book Review 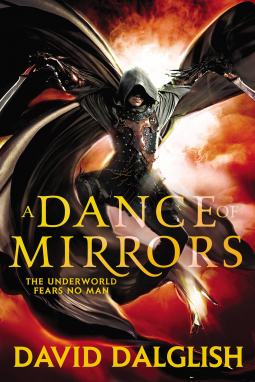 From the publisher: One has conquered a city. The other covets an entire nation.


Haern is the King's Watcher, protector against thieves and nobles who would fill the night with blood. Yet hundreds of miles away, an assassin known as the Wraith has begun slaughtering those in power, leaving the symbol of the Watcher in mockery. When Haern travels south to confront this copycat, he finds a city ruled by the corrupt, the greedy and the dangerous. Rioters fill the streets, and the threat of war hangs over everything. To forge peace, Haern must confront the deadly Wraith, a killer who would shape the kingdom's future with the blade of his sword.

Man or God; what happens when the lines are blurred?
Fantasy author David Dalglish spins a tale of retribution and darkness, and an underworld reaching for ultimate power in the third novel of the Shadowdance series, previously released as A Dance of Death.

Dance of Mirrors, by David Dalglish, is the third book in the Shadowdance series.  Following on the heels of Dance of Blades, which I thought was fantastic (see my review here), Dance of Mirrors picks up two years later.  Haern the Watcher has established an uneasy peace in Veldaren.  Alyssa Gemcroft, a member of the Trifect, is informed of the brutal deaths of family members of Laurie Keenan, another member of the Trifect.  Left at the scene of the crime is a symbol: an eye drawn in blood, the symbol of the Watcher.  However, Haern is not responsible, so Alyssa recruits Haern and Zusa to travel with her to Angelport to avenge this crime and confront a new vigilante, the Wraith.


I found this novel a little uneven, much like Dance of Cloaks, the first book in the series. I can’t really put my finger on why I preferred the 2nd book so much more than the 1st and 3rd, so I’m going to list pros and cons in the hopes helping future readers.
Pros: Dalglish began to expand his world with this book, taking the characters out of Veldaren, into the southern seaport of Angelport.  It was a nice change, and I liked seeing more of the world.  The characters of Haern and Zusa continue to be strong focal points of the series.  They begin working together and the chemistry between them is intriguing.  Haern’s moral struggle continues, and I look forward to when he becomes more assured of himself.  Dalglish introduces the elves in Dance of Mirrors.  They are a little like Tolkien’s elves, but with more disdain toward men.  They were a nice addition to the overall world.  Alyssa Gemcroft is also becoming a deeper character; she has changed a lot from her initial introduction in Dance of Cloaks.  The Wraith is a pretty cool antagonist and serves as a nice mirror for Haern.
Cons: The plot is still driven by political intrigue and infighting among various groups, with the Merchant Lords of Angelport taking the place of the Thieves Guilds against the Trifect, and the elves thrown in for good measure.  I’d like to see something different, or at least a different climax structure. There is also some gratuitous sex thrown in that doesn’t really advance the plot; however, it is not graphic.  Torgar, Ulrich Blackwater, and Lord Ingram Murband don’t have much depth.  They are pretty much stock characters.

Overall, this was an entertaining book.  It was not Dalglish’s best work (I really liked Dance of Blades), but it was good.  It will hit the sweet spot for fans of Dark and Gritty Fantasy, in the vein of Brent Weeks Night Angel trilogy.  With more books to come in the Shadowdance series, I’m hopeful that Dalglish will continue to expand Haern’s world (maybe more of the Eschaton mercenaries?) and that the plots will evolve from the simple political maneuverings into something greater.  The potential is there.

I received a preview copy of this book from Orbit Books in exchange for an honest review.
Posted by Scott at 7:43 AM