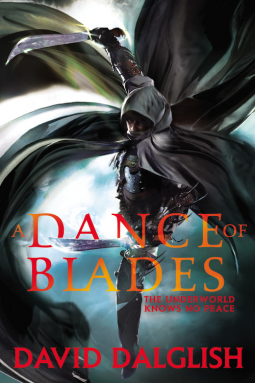 From the publisher: It's been five long years since the city learned to fear...


The war between the thief guilds and the powerful allegiance known as the Trifect has slowly dwindled. Now only the mysterious Haern is left to wage his private battle against the guilds in the guise of the Watcher - a vicious killer who knows no limits. But when the son of Alyssa Gemcroft, one of the three leaders of the Trifect, is believed murdered, the slaughter begins anew. Mercenaries flood the streets with one goal in mind: find and kill the Watcher.


Peace or destruction; every war must have its end.


Fantasy author David Dalglish spins a tale of retribution and darkness, and an underworld reaching for ultimate power.

I was hesitant to begin reading Dance of Blades, the second book in David Dalglish’s Shadowdance series.  The first book, Dance of Cloaks (my review is here), was okay, but there were parts I struggled getting through and I didn’t feel that it brought anything new or interesting to the genre.  However, what it did have going for it was the character of Haern the Watcher, and the scenes he was in were terrific.  Well, I’m here to say that Dance of Blades is a great improvement on the promise that began in book one.

Rather than having to introduce everyone and provide motivation for them to come together (the war between the thieves guilds and the Trifect), Dalglish is now able to concentrate on filling out the characters and expanding the story.  It’s been five years, and Haern is still on his mission to eliminate the guilds.  Alyssa is sends for her son to be brought home, and an act of betrayal ignites a slaughter.  Veliana is trying to keep the Ash Guild afloat when she encounters Deathmask, a new and very intriguing character.  The threads of the story seem to pull together much more organically in this book, and I did not find the story dragging at all.  The resolution was satisfying, but also left enough open to send the characters in a new direction in the next book.

Many of the major characters from the first book return for the sequel.  In addition to Haern, we read further about Alyssa Gemcroft, Veliana, Zusa, Delysia, and Senke.  Their roles all flow together much more seamlessly than they did in Dance of Cloaks.  Alyssa becomes a stronger character and more of a focal point.  Zusa begins to play a pivotal role.  Veliana is instrumental in the new war between the guilds and the Trifect.  I particularly enjoy the development of Haern, who continues to struggle with who and what he is (an assassin forged by the father he hates) and who he’d like to become.  He is a great conflicted protagonist, and is the reason I decided to read Dance of Blades.

There are also several new and interesting characters introduced.  Deathmask is a mysterious “nameless” former wizard/thief, who stirs the pot between the guilds and the Trifect. He is definitely a character who’s backstory needs to be told.  Ghost is a giant of a mercenary, who’s background is also begging for a story.  Delysia’s brother Tarlack jumps on the scene with wit and magic.

The city of Veldaren and the surrounding lands are also explored to a greater extent than they were in the first book, and Dance of Blades is better for it.  It will be interesting to see how the world continues to develop as Dalglish continues to write adventures contained therein.

While I really enjoyed this book, it’s hard for me to put my finger on just why it was better than the first.  I did find it interesting that in his Note from the Author, Dalglish mentioned that Dance of Blades was his favorite and needed the least amount of revision from its earlier, self-published form.  Something about it just rings truer, and I’m glad I took a chance on it.  If the books continue to improve like this, the series will definitely be one to follow and Dalglish will put his name on the same level as some of Fantasy Literature’s current big names.  I highly recommend Dance of Blades.

I received a preview copy of this book from Orbit Books in exchange for an honest review.
Posted by Scott at 6:45 AM