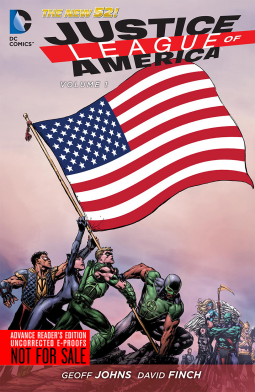 From the publisher: Following the events of Throne of Atlantis, it is deemed nessesary to create a new Justice League.  This new superhero team is under the command of Col. Steve Travor, of the United States Military's A.R.G.U.S. division(Advanced Research Group Uniting Superhumans).  Signing up for duty with this new incarnation of the JLA are Catwoman, Katanna, Green Lantern, Green Arrow, Martian Manhunter, Steve Trevor, Hawkman, Star Girl and the long-awaited return of 80s superhero, Vibe.

Justice League of America Vol. 1 contains the origin of the Justice League of America (JLA), Amanda Waller and A.R.G.U.S.’s direct response to the more world-spanning Justice League (which includes Batman, Superman, and Wonder Woman, among others).  The JLA is designed to be America’s defense against the Justice League in case they ever go rogue.  With that in mind, Waller and Steve Trevor (a former Justice League liaison) put together a team of disparate personalities but specific skill sets.  Trevor’s job is to get them to work as a team but without any time for the members to get used to each other.  Waller’s job is to make them “America’s Team”, including booking the young, Taylor Swift-esque Stargirl on all the morning talk shows as the public face of the team. Other team members include Martian Manhunter, Vibe, Catwoman, Hawkman, Green Arrow, Katana, and the new Green Lantern.  It’s an interesting concept, and it’s executed fairly well.
My biggest complaint isn’t with Geoff Johns’s story, but the way this collection is put together.  The first several chapters form one coherent story, but from then on it’s a mess.  There is a tie-in with the Trinity War story running through all the Justice League titles in their various incarnations.  Several times the reader is dropped into the action with no explanation given and no background to what is going on. These are just a couple of chapters of a larger story going on, but the JLA portion can’t really be read by itself.  This part would have been much better served as part of a Trinity War collection, rather than a Justice League of America collection. The last portion of the book contains the Martian Manhunter back-up features, and they are pretty good.  They add a nice dimension to the character, and in one case actually show important information to understanding an event earlier in the book.
I liked this book and the team, and look forward to reading their further adventures.  However, I hope DC does a better job putting the stories together in future books.
I received a preview copy of this book from DC Comics in exchange for an honest review.
Posted by Scott at 6:29 AM