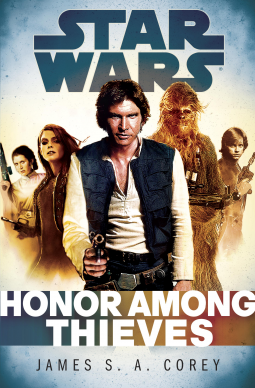 From the publisher: When the Empire threatens the galaxy’s new hope, will Han, Luke, and Leia become its last chance?

When the mission is to extract a high-level rebel spy from the very heart of the Empire, Leia Organa knows the best man for the job is Han Solo—something the princess and the smuggler can finally agree on. After all, for a guy who broke into an Imperial cell block and helped destroy the Death Star, the assignment sounds simple enough.

But when Han locates the brash rebel agent, Scarlet Hark, she’s determined to stay behind enemy lines. A pirate plans to sell a cache of stolen secrets that the Empire would destroy entire worlds to protect—including the planet where Leia is currently meeting with rebel sympathizers. Scarlet wants to track down the thief and steal the bounty herself, and Han has no choice but to go along if he’s to keep everyone involved from getting themselves killed. From teeming city streets to a lethal jungle to a trap-filled alien temple, Han, Chewbacca, Leia, and their daring new comrade confront one ambush, double cross, and firestorm after another as they try to keep crucial intel out of Imperial hands.

But even with the crack support of Luke Skywalker’s x-wing squadron, the Alliance heroes may be hopelessly outgunned in their final battle for the highest of stakes: the power to liberate the galaxy from tyranny or ensure the Empire’s reign of darkness forever.

Honor Among Thieves, by James S.A. Corey, is the second book in the Empire and Rebellion series, which is loosely tied together and takes place between A New Hope (Star Wars) and The Empire Strikes Back.  I’ve read several of the Star Wars Expanded Universe novels and had mixed results, but I really enjoyed this book.

The main reason I liked Honor Among Thieves is the time period it takes place in.  A New Hope was my first movie, and I have an affinity for the characters from the original trilogy.  While Princess Leia and Luke Skywalker have roles in this story, the point of view character is Han Solo.  Corey does a fantastic job of capturing Han’s voice and personality from the original Star Wars.  Han is still questioning his involvement with the Rebel Alliance, and is full of quick one-liners and sarcastic remarks.  Han’s relationship with Chewbacca is also on display, and it strikes the right chords as the two interact with each other.  There are several references to Han’s past, as well, further fleshing out his character.

As for the story itself, it was entertaining.  Han Solo and Chewbacca are on a mission to retrieve a Rebel spy, Scarlet Hark, and bring her and the sensitive information she has discovered back to the Rebel fleet.  Unfortunately, someone got to the data first and Hark refuses to leave without it.  Solo, Chewbacca, and Hark then begin the process of tracking down and uncovering the data.  Along the way, Han encounters an old colleague who is determined to take him to Jabba the Hutt and claim the bounty on Han’s head.  There is a rendezvous with Leia, several encounters with Star Destroyers, and a visit to an unexplored planet.

New characters like Scarlet Hark and Baasen Ray only serve to add depth to the story.  Scarlet is a tough, resourceful, and attractive woman; she is also a top-notch spy for the Rebel Alliance.  Her interactions with Han lead to some interesting dynamics once Leia is thrown in the mix, particularly when the reader knows where that relationship will end up. Ray is a smuggler looking to make some extra money by bringing Solo to Jabba.

Since the setting is so vital to the original movies, I was interested to see how Corey would handle this aspect of the Star Wars universe.  He did a fine job, taking the reader to three different planets ranging from an Imperial center to a city carved in the mountains to an ancient and unknown jungle world.  It was majestic and wonderous without seeming to be repetive.

Corey did a great job capturing the spirit of the original trilogy, especially in the raw newness of the characters.  Han’s hard edges haven’t been worn off, Luke still has that shiny new smell, and Leia is young and in charge.   In addition, Corey placed a few easter eggs here and there for careful readers to pick up as the story of the rebels leads them to the events of The Empire Strikes Back.  With new movies on the horizon, Honor Among Thieves is a welcome addition and will definitely serve to fill that yearning for new stories that many Star Wars fans have.  I highly recommend this book.

I received a preview copy of this book from Del Ray Spectra in exchange for an honest review.
Posted by Scott at 10:04 AM