The Unwritten Vol. 8: Orpheus in the Underworlds by Mike Carey - Book Review 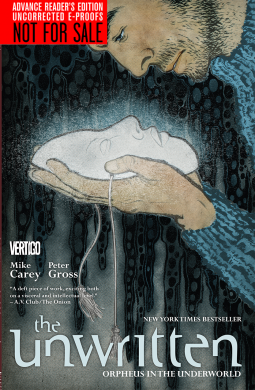 From the publisher: In this eighth volume of the critically-acclaimed new series from the Eisner-nominated creative team, Mike Carey and Peter Gross, Tommy ventures into the land of the dead to find and rescue Lizzie. But the journey through Hades pits Tommy against all kinds of enemies of undead. But none of these encounters prepare him for his meeting with the king -- or for the responsibilities he has to take on for some very familiar damned souls.

Collects #42-49 of The Unwritten.
Once again, Mike Carey has worked his magic with The Unwritten.  The latest volume has a couple of storylines running through it.  The first arc is a story with Tommy, Richie, Didge, and Danny trying to help Tommy find a way to the Underworld in the Austrailian outback.

The second arc concerns Didge and Richie trying to solve a case where zombies keep killing people.  It seems the imminent death of Leviathan is leaving a void and various powers are rushing to fill it.  Madame Rausch also shows up again, and is seeming to be ready to assume a larger role in Tommy’s story.

The main story concerns Tommy Taylor and his quest to rescue Lizzy Hexam from the Underworld.  Carey takes this opportunity to give his spin on the Orpheus myth.  Along the way, Tommy comes face-to-face with harpies, Baron von Munchausen, two murdered children, Elizabeth Bennett, and  Pauly the rabbit, who wants revenge on both Tommy and his dad.  He also encounters the evil Pullman again.  As Tommy, Lizzy, and Pauly make their way through Hades, they find a larger revelation about Leviathan.  This volume ends with a wonderful cliffhanger that left me anxious for the next volume in the series.

This was not the best volume in The Unwritten series.  In fact, it seemed to be a transitional story, setting future events up and starting them in motion.  Still, Carey’s not-quite-perfect is still fun to read, and better than most other writers at their best.  Gross’s art, as usual, adds to the mood of the story.

I would recommend this volume to fans of The Unwritten, but it is definitely not a good starting place for new readers.  If you find yourself in that group, then find the first volume and settle in for a great ride.