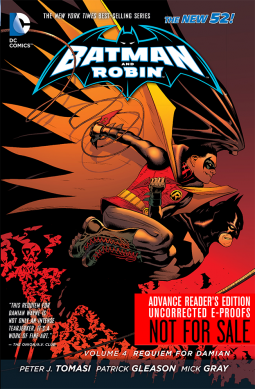 From the publisher: Spinning out from the tragic death of Damian Wayne in the pages of Batman Incorporated, the Dark Knight attempts to cope with the death of not only his partner, Robin, the Boy Wonder, but also his son. Will he be able to deal with his grief on his own, or will he turn to his allies to try and help him through the pain?

Requiem for Damian, by Peter Tomasi, may be the best Batman collection I have ever read, and that's saying a lot. This book immediately follows the events of Batman Incorporated Vol. 2.  The death of his son Damian, aka Robin, has devastated Bruce Wayne.  The events of this book follow his attempts to come to grips with the reality of Damian's death and the grief that is overwhelming Batman.

The collection starts off with a spectacular "silent" issue, which shows Batman dealing with the loss of Damian and trying to move forward.  The art, by Patrick Gleason, is fantastic and truly expresses the struggle Bruce Wayne is going through.  As an aside, this issue deserves an Eisner Award for Best Single Issue.

The rest of the collection shows Bruce continuing to work through his pain, with a supporting member of the Bat-family as a foil.  Some of these stories seem hopeful, such as Batman's reconciliation with Jason Todd, aka Red Hood.  Others, like Batman's encounter with Batgirl (who is having her own crisis of confidence), are more confrontational.  Each "team-up" highlights aspects of the supporting hero's character, finally concluding with Dick Grayson, aka Nightwing.  In typical fashion, Grayson adds a ray of hope to Batman's grief.  However, the conclusion, spotlighting the interaction and relationship between Alfred Pennyworth and Bruce Wayne, is nearly heartbreaking, but perfectly wraps up this story.

One final note: a new character, Carrie Kelley, makes her first appearance in the New 52 universe.  Careful readers will note that she shares a name with a character from Frank Miller's The Dark Knight Returns.

If it was possible to rank this book as better than Highly Recommended, I would do it.  It is touching, heartbreaking, and hopeful all in one shot.  Buy it; read it.

I received a preview copy of this book from DC Comics in exchange for an honest review.
Posted by Scott at 10:44 AM