Fairest Vol. 3: The Return of the Maharaja by Sean E. Williams - Book Review 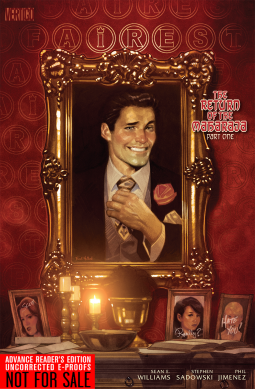 When Nalayani seeks the help of the Maharaja to save her village from the Dhole, she uncovers a secret that could change the Fables Universe forever: the still alive and long-thought dead Prince Charming!

Fairest is a spin-off of the excellent Fables series by Bill Willingham.  Generally, it relates the stories of the female fables, who may not get a lot of screen time in the main book.  However, Fairest Vol. 3.: The Return of the Maharaja (written by Sean E. Williams) isn't really about one of the ladies.  Sure, it stars Nalayani, a fable living in a village in India (or at least where Indian fables live).  She displays the courage and intelligence we've come to expect from these characters.  But, as far as I know, she is not really a well-known fable like the other stars of this book have been.  The real star of The Return of the Maharaja is Prince Charming, who was last seen sacrificing himself in the pages of Fables.  Charming's return seems to be hinting at a greater storyline in upcoming issues, and was done in an entertaining way that showed great development for the character.

This is where I have a slight problem with this book.  While the collection is a great vehicle for re-introducing Charming into the Fables storyline, the concept is supposed to focus on the female fables.  This is a minor quibble, I know, because the writing is fine and Nalayani and Charming have a very interesting story.  But if there is going to be a side-vehicle for telling stories about any of the fables, then that's what it should do (and I would totally read that).  Otherwise, I think the core concept of a title needs to be adhered to.

Overall, this was a good book.  It will please fans of the series and characters.  Williams does a nice job, and it will be interesting to see where this storyline heads in the future.

I received a preview copy of the book from DC Comics in exchange for an honest review.
Posted by Scott at 7:16 AM