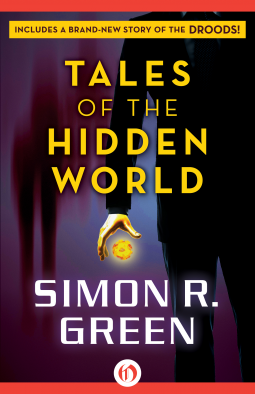 From the publisher: Seventeen delightfully unexpected stories from Simon R. Green—including a brand-new adventure of the Droods—take us deep into the Darkside, embroil us in the Secret Histories, and lead us into the shadowy places where monsters and demons roam

Welcome to the worlds of Simon R. Green. In this wide-ranging collection, the New York Times–bestselling urban fantasist opens doors into hidden places: strange realms bordering our own mundane existence and prowled by creatures of fancy and nightmare. Here are the strange, frequently deadly—and sometimes even dead—things that lurk in garbage-strewn city alleyways and grimy subway stations after midnight, visible only to the most perceptive human or inhuman eye.

In these tales, Green revisits the ingenious worlds within worlds that he created for his wildly popular novels. Take a stroll on the Darkside with a jaded street wizard, an underpaid government functionary responsible for keeping demons, vamps, and aliens in line. Enter the hidden recesses of Drood Hall, where the aging family member who creates powerful weapons that protect humankind recalls his long and bloody career. Join a squad of no-longer-human soldiers dispatched to combat the all-consuming jungle on a distant planet. Visit a house at the intesection of two realities that serves as a sanctuary from the evil of all worlds. Confront the unstoppable zombie army of General Kurtz in a brilliant homage to Apocalypse Now. And whatever you do, never forget that there are monsters out there. Really.

Simon R. Green is best known as a novelist, but he began his career writing short stories.  In Tales of the Hidden World, seventeen of Green's stories are collected, including his first published story, the last he wrote before becoming a novelist, and some from more recent times.  Among these stories are classic sword and sorcery, science fiction, zombie tales, and urban fantasy.  There are also two stories that tie in with current series by Green, The Secret Histories (The Drood Family) and the Nightside.

Because there are so many favorites, I'll just mention my favorite three: Question of Solace, Dorothy Dreams, and Jesus and Satan Go Jogging in the Desert.

Question of Solace is a story that fits in the Secret Histories series. Previous exposure to the series is unnecessary, as the story concerns a side character, Jack Drood aka the Armorer.  As the overall series has a James Bond-ish bent, this story follows suit, with the Armorer as an analog for Q.  It is a touching look at a man, coming to the end of his life and career, who questions whether he did more good in the field or out, and how his career and life compare to that of his more well-known brother, James.  Based on this story, I'll probably be checking out the main Secret Histories series.

Dorothy Dreams is a look at Dorothy Gale, of Wizard of Oz fame, as an old woman in a nursing home. She is always stuck inside and yearns to go outside and maybe visit Oz one final time.  When she gets her wish, things aren't what they seem.  Again, there is a bittersweet feel to this story, but the ending opens up many possibilities to explore.

While not exactly according to the Gospels, Jesus and Satan Go Jogging in the Desert is an interesting take on the story of Satan tempting Jesus in the desert. Told from Satan's point of view, there is a resigned feeling to the proceedings.  The conversation between the two has a nice view on Jesus's role; however, I don't suggest that it is in anyway what the Bible is saying.  In the wrong hands, this story could become very sacrilegious; Green treats the material with respect, regardless of whatever his personal views on religion might be.

The stories vary in length, and the quality varies from good to superb. Green switches genres and styles fairly easily.

I would recommend Tales of the Hidden World, particularly as in introduction to Simon R. Green, his writing style, and his worlds.

I received a preview copy of this book from Open Road Integrated Media in exchange for an honest review.
Posted by Scott at 9:09 AM