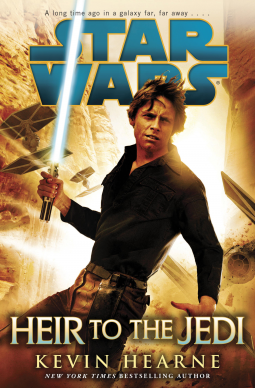 A thrilling new adventure set between A New Hope and The Empire Strikes Back, and—for the first time ever—written entirely from Luke Skywalker’s first-person point of view.

Luke Skywalker’s game-changing destruction of the Death Star has made him not only a hero of the Rebel Alliance but a valuable asset in the ongoing battle against the Empire. Though he’s a long way from mastering the power of the Force, there’s no denying his phenomenal skills as a pilot—and in the eyes of Rebel leaders Princess Leia Organa and Admiral Ackbar, there’s no one better qualified to carry out a daring rescue mission crucial to the Alliance cause.

A brilliant alien cryptographer renowned for her ability to breach even the most advanced communications systems is being detained by Imperial agents determined to exploit her exceptional talents for the Empire’s purposes. But the prospective spy’s sympathies lie with the Rebels, and she’s willing to join their effort in exchange for being reunited with her family. It’s an opportunity to gain a critical edge against the Empire that’s too precious to pass up. It’s also a job that demands the element of surprise. So Luke and the ever-resourceful droid R2-D2 swap their trusty X-wing fighter for a sleek space yacht piloted by brash recruit Nakari Kelen, daughter of a biotech mogul, who’s got a score of her own to settle with the Empire.

Challenged by ruthless Imperial bodyguards, death-dealing enemy battleships, merciless bounty hunters, and monstrous brain-eating parasites, Luke plunges head-on into a high-stakes espionage operation that will push his abilities as a Rebel fighter and would-be Jedi to the limit. If ever he needed the wisdom of Obi-Wan Kenobi to shepherd him through danger, it’s now. But Luke will have to rely on himself, his friends, and his own burgeoning relationship with the Force to survive.

Kevin Hearne’s Star Wars: Heir to the Jedi is the latest in the new “official cannon” line of Star Wars stories.  It takes place fairly soon after the Battle of Yavin.  The story follows Luke Skywalker as he is tasked with rescuing a cryptographer who has been co-opted into working for the Empire.  Along the way, he interacts with several old friends, including Princess Leia Organa, Admiral Ackbar, and R2-D2.  There are also new planets and new characters introduced.

The first thing that struck me about Heir to the Jedi is that the story is told in the first person, from Luke’s point of view.  I’m not sure how often this has been done in Star Wars books, but it was new to me, and I enjoyed it.  I feel that Hearne did a great job of capturing Luke’s enthusiasm for the Rebellion, his uncertainty about the Force, and his general naivete (he did, until recently, live on a very rural sand planet).  This portrayal seemed to reflect the Luke Skywalker from Star Wars: A New Hope, and begins to show his journey to the character we are familiar with in The Empire Strikes Back.  The narrative style also is nice as the reader gets access to Luke’s inner struggle with his abilities (or lack of) to use the Force.  It’s easy to forget that he only spent a short time with Obi Wan Kenobi, and did not really receive much instruction in how to use the Force.  Hearne does an outstanding job in conveying this.

Along with Luke’s inner dialogue, Hearne explores new planets, several of which are very different than have been seen in previous Star Wars outings.  He brings in alien species both familiar (Rodians) and new (Givin).  New character Nakari Kelen proves an interesting companion for Luke, and provides a romantic opportunity that will eventually lead him away from Leia. Drusil, a Given codebreaker, is another new character. She continues Star Wars' tradition of interesting non-human lifeforms.  In fact, not only do the Given not look human, they usually speak in mathematical equations (one of my favorite parts of the book is Drusil's math joke; watch for it).

Underlying everything is a sense of adventure and fun.  As the films went on, there was a darkness present. It was a necessary component, but some of the innocence was lost.  Heir to the Jedi does a great job of renewing that fun, with the spectre of Darth Vader and the Empire hanging out in the background.

I enjoyed Heir to the Jedi more than any other Star Wars novel in recent memory.  If this is an example of what fans/readers can expect going forward, it promises to be an exciting time in the Star Wars Expanded Universe.  I highly recommend this book.

I received a preview copy of this book from Random House in exchange for an honest review.
Posted by Scott at 7:31 AM