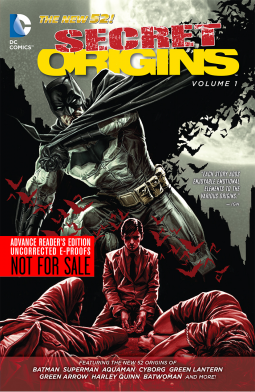 From the publisher: At last, the SECRET ORIGINS of the World's Greatest Heroes in The New 52 can be revealed! The beginnings of the most popular characters in the DC Universe are finally told here, in stories that fans have been clamoring for since September 2011. Included here are the origins of The Last Son of Krypton and Kara Zor-El, Supergirl, plus the first Robin, Dick Grayson.


Written by a host of the industry's brightest talent including Jeff Lemire (JUSTICE LEAGUE UNITED) Greg Pak (BATMAN/SUPERMAN) and Tony Bedard (GREEN LANTERN CORPS) and painted covers by Lee Bermejo (JOKER), this new series is a fantastic way to jump on with the DC Universe!
Collects issues #1-4.

Secret Origins, by a host of writers, is a book that does indeed chronicle the origins of a variety of DC’s heroes/villains.  This collection of the first four issues focuses several of the big guns (Batman, Superman, Green Lantern, Green Arrow, and Aquaman), the Bat-family (Nightwing, Robin, Red Robin, Batwoman, and Harley Quinn), and several other assorted characters (Supergirl and Stargirl).  As a long time reader of DC Comics, I was pretty familiar with most of these stories, even in their New 52 form.  Not a whole lot has changed, but it was nice to see it fleshed out.  I think this series may actually pay-off better when it deals with characters whose backgrounds have changed significantly.

As far as the storytelling goes, it was pretty simplistic.  Because there wasn’t any new ground to break, the writers played it straight.  In fact, most of the stories were full of narration rather than dialogue.  This style was effective for telling the story, but didn’t really draw me in.

I would recommend Secret Origins as a great starting point for new readers, but it is not worth it to those familiar with the characters, at least those presented in this collection.

I received a preview copy of this book from DC Comics and Netgalley in exchange for an honest review.
Posted by Scott at 6:26 AM