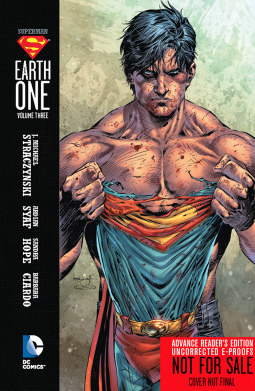 From the publisher: The follow-up to the NEW YORK TIMES #1 bestselling graphic novels SUPERMAN: EARTH ONE VOL. 1 and 2 is here! Written by J. Michael Straczynski with art by Ardian Syaf (BATGIRL), SUPERMAN: EARTH ONE VOL. 3 follows a young Clark Kent as he continues his journey toward becoming the World's Greatest Super Hero. After defeating villains terrestrial and beyond, Superman faces a threat that he can't simply outmuscle. A threat smarter, more cunning and deadly than he can imagine: the Luthors!

J. Michael Straczynski’s Superman: Earth One Vol. 3 is a good book.  Following on the heels of the first two volumes, the current book continues a modern reimagining of Superman outside of DC Comics direct New 52 mythology.  This allows the author freedom from having to tie into anything currently happening, and creates a world where the consequences can be real and lasting, not to be undone by the latest big event.
Superman has revealed himself to the world and has fought off various threats, both local to the earth and from other planets.  In addition, he removed a dictator from power, but not at the behest of any government.

It is this last action that has gotten the attention of the U.N., scaring many that Superman may use his power as he sees fit, not always acting in the best interests of humanity.  When a mysterious visitor (Zod) with powers like Superman’s shows up at the U.N., the military and the world’s governments take him up on his offer to eliminate the potential threat Superman poses.  As Zod gets help from Lex and Alexandra Luthor, Clark Kent begins to question his relationships with his friends, including Lois Lane and Lisa Lasalle (his neighbor), who may know more about him than he thinks.  As the storylines pull together, Clark/Superman and the world will be left to deal with the ramifications.

The Earth One series is really entertaining.  Straczynski does a great job updating the story of Superman, while keep the heart of the character true and consistent.  I also really enjoy the fact that it takes place outside the mainstream DC Universe, as it removes the baggage that can come with all the varying continuity.  This gives Straczynski the opportunity to provide his take on classics villains, such as Zod, or to add new characters, like Lisa Lasalle.  I think his take on Lex Luthor, and his wife Alexandra, is also inspired, providing a twist on the traditional Luthor role, but remaining true to the conflict between the characters.

I highly recommend Superman: Earth One Vol. 3, and the series, for a new look at an old classic.  This also functions as a great book for people who don’t typically read comics because of the years of history they don’t really understand.